Dead Moon call it a day 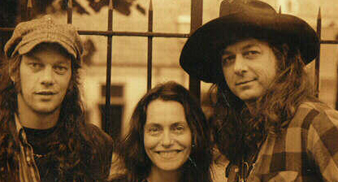 Legendary group Dead Moon have announced that they are to split after more than 20 years.

Fred Cole formed the band in Oregon in 1987 after 60’s cult garage psch band The Lollipop Shoppe who featured on ‘Nuggets.’

A Dead Moon compilation, “Echoes Of The Past,” showing off Dead Moon’s deranged, raggedly thrilling garage punk music was voted in at number 13 in Uncut’s Top 20 Reissues of 2006 poll.

All Dead moon vinyl releases published through their own tombstone label were cut on the same lathe that the Kingsmen’s version of “Louie Louie” was cut on back in 1963.

Pearl Jam’s Eddie Vedder is a celebrity fan, and the Seattle group cover the Dead Moon song “It’s OK”, regularly playing it spliced with their song “Daughter” during live shows.

Many rumours have been circulating about the split on the internet – most of them citing touring problems in europe, but no official reason has yet been given for the split!