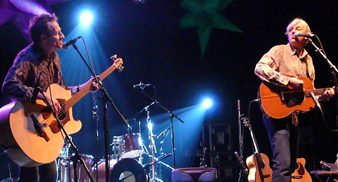 The first night of Dorset’s End Of The Road Festival has drawn to a spectacular close with the epic post-rock of Yo La Tengo.

The US stars, who have been together for over twenty years, performed a well-received and career-spanning set in the leafy surroundings of the Garden Stage, despite saying little to the audience.

Yo La Tengo closed their set with ‘Nuclear War’ under a clear starry sky.

At one point during their performance, which featured a selection of songs from Hitchcock’s many solo albums including “Balloon Man” and “I Often Dream Of Trains”, the singer even joked: “This is just a taste of what you’ll be seeing in the O2 tent on November 26th!”

The night was rounded off in the Big Top Tent with a high-spirited jam session from the artists who had performed in the course of the day.

Backed by Howe Gelb and his band, singers including Kate Maki and Hitchcock performed loose renditions of their songs as well as a cover of disco classic “King Fu Fighting”, until Gelb rounded off the evening with a bizarre cover of Johnny Cash‘s “Ring Of Fire”, mixing in sections from The Beatles‘ “Hey Jude”.