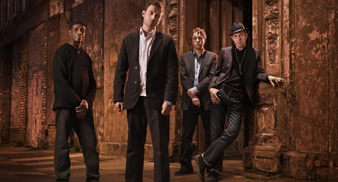 The second Latitude festival takes place at Henham Park Estate in Southwold, Suffolk from July 12 – 15, with all the musical action kicking off on the 13th.

Over on the Uncut stage, we will be hosting performances from Super Furry Animal Gruff Rhys, Soulsavers featuring Mark Lanegan, Rickie Lee Jones and Turin Brakes.

Of course Latitude is not just about music, there will be swathes of drama, comedy, poetry, cabaret and other things to while away the weekend. What could be better than diving from seeing Dylan Moran making you chuckle to catching Shakespearean classic A Midsummer Nights Dream at the outdoor Theatre?

Also there are events ‘In The Woods’ – confirmed so far is a party DJ’ed by Radio 1’s Rob Da Bank and Dialogue artist Karl James who returns to Latitude with his ‘listening shed’ for the second time.

Uncut is especially excited to see the line-up for the film screenings taking place across the three days; Latitude boasts an exclusive partnership with BAFTA to hold special director’s Q&As and live orchestration to films such as Alfred Hitchcock’s “The Lodger.”

We’ll be blogging straight from the lush Henham Park Estate to keep you updated on all the great musical, theatrical and simply chilled-out treats that the festival has to offer – but it would be great if you could join us there.

Even Michael Eavis, organiser of the now very sold-out Glastonbury festival says Latitude has the same sort of vibe. He commented to frustrated non-Glasto ticket holders: “can I suggest another alternative that might be more attractive – namely the “Latitude Festival” set in a beautiful part of Suffolk. Although much smaller it has some terrific music and has a similar feel to it, by way of theatre, comedy, circus, and atmosphere.”

Click here for full details about the Mean Fiddler event from www.latitudefestival.co.uk

(Saturday)
The Good, The Bad And The Queen
CSS
Clap Your Hands Say Yeah
The Hold Steady
Bat For Lashes
Annuals
The Rushes

UNCUT ARENA (across the three days, when we know which artists play which day, we’ll let you know here first!)

Many more acts still to be announced, so watch this space! See you in the field.