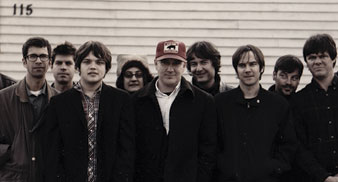 Their 11th studio album was recorded in Nashville at producer Mark Nevers’ Beech House studio and is dedicated to singer Kurt Wagner‘s late friend and collaborator, the singer-songwriter Vic Chesnutt, who died in 2009. You can listen to the album’s opening track ‘If Not I’ll Just Die’ by scrolling down to the bottom of the page and clicking.

According to Wagner, Nevers’ idea for the album was to give it a “‘psycha-Sinatra‘ sound”. He continues: “It was a studio creation, not a type of recording based on band performance, and this was a radical approach for us. I felt Lambchop had one more good record in us, and this time I was going to do things as directly and true to my desires as possible.”

Kurt Wagner and co will follow the release with a handful of UK tour dates, starting at London Barbican on March 1 before finishing up at Bristol Fleece on March 7.

The ‘Mr M’ tracklisting is:

To check the availability of [url=http://www.seetickets.com/see/event.asp?artist=lambchop&filler1=see&filler3=id1nmestory]Lambchop tickets[/url] and get all the latest listings, go to [url=http://www.nme.com/gigs]NME.COM/TICKETS[/url] now, or call 0871 230 1094.

Lambchop – If Not I’ll Just Die by cityslang