Extensive collection of memorabilia to go on show in Seattle 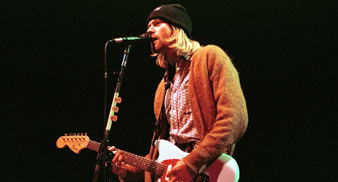 Pieces of the first guitar Nirvana‘s Kurt Cobain destroyed onstage will be included in a new exhibition about the band in Seattle.

Shards of the Univox Hi-Flyer guitar will be among the 200 band artifacts to be featured in the exhibition, called ‘Nirvana: Taking Punk To The Masses’.

The show will also feature the yellow cardigan Cobain often wore between 1991 and 1994, handwritten lyrics to ‘Spank Thru’ and ‘Floyd The Barber’ and the winged angel stage prop featured on the band’s ‘In Utero’ tour.

The exhibition will run from April 16-22 at the Experience Music Project in the band’s hometown.

Bassist Krist Novoselic said: “It’s great that there will soon be a collection that celebrates [Cobain’s] contribution to music and culture.”

He added: “There’s a story with Nirvana at its centre, but it’s a story that also includes the many people, bands and institutions that make up a music community.”

Along with the exhibits the show will feature recorded recollections from Nirvana associates.

A 250 page book, Taking Punk to The Masses: From Nowhere To Nevermind is also being planned to be published by Fantagraphics Books in conjunction with the exhibition.