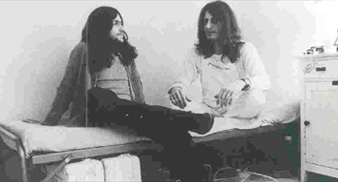 News has just reached Uncut that the great Klaus Dinger has died, aged 61. The German drummer was best known as half of Neu! alongside Michael Rother.

Dinger was a provocative and inspirational figure in the German music scene of the 1970s. He first surfaced, briefly, as drummer in a very early line-up of Kraftwerk, before he and Rother (another fleeting Kraftwerk member) broke off to form Neu!

Neu! went on to record three extraordinary albums that epitomised the motorik strain of Krautrock, thanks to Dinger’s pattering, insistent drums. He also began to contribute wild and vivid vocals, so that tracks like “Hero” and “After Eight” from Neu! 75 were an acknowledged influence on an impressionable John Lydon.

After his partnership with Rother dissolved, Dinger formed La Dusseldorf with his brother Thomas and Hans Lampe. Between 1976 and 1980, they released three excellent albums which privileged Neu!’s punkier, more ecstatic side.

Dinger’s later career was more erratic, and he sometimes worked under the name of La Neu! A projected reunion with Rother, around the time of official Neu! CD reissues, got no further than a handful of fraught joint interviews.

On his website, Michael Rother posted this memorial: “Together with many friends of his music I will remember Klaus for his creativity as an artist and I will think about him with gratitude for his wonderful contributions to our project NEU!”