Kinks Legend Plays Through Hits At The Proms

Ray Davies teams up with Razorlight's Borrell for Sunny Afternoon 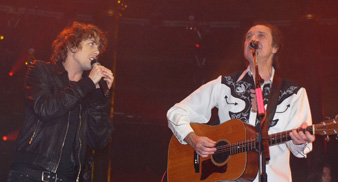 The two singers duetted on a version of The Kinks’ number one record ‘Sunny Afternoon’. The pair had previously re-recorded the track last year.

Introducing Borrell, Davies told the audience: “I would like to introduce someone to you. Johnny Borrell from Razorlight, give this kid a round of applause,” before he quipped: “I used to complain about him when he was a kid in school.”

Davies was backed by a nine-piece band throughout his set, as well as drafting in the Crouch End Festival Choir for four Kinks tracks – also played four songs from his new studio album ‘Working Man’s Cafe‘.

The new solo record, officially released today (October 29) was given away free with last week’s Sunday Times, in a similar way that Prince’s new album was given away by a newspaper earlier this year.

In reference to the giveaway, Davies said: “My new record is not out until tomorrow but strangely some people seem to know the songs already. There must be some sort of conspiracy.”

He closed the show with an audience-rousing The Kinks’ famous hit ‘You Really Got Me’.

Video clips and photos from through out the five day Electric Proms are available from the website here: www.bbc.co.uk/electricproms.