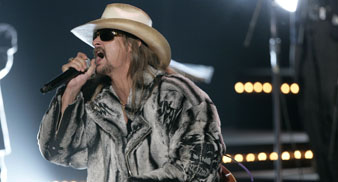 Kid Rock is one of five more acts added to this year’s Download festival bill.

The Subways, Black Dahlia Murder, Throwdown, and Bleeding Through are also now joining previously announced headliners KISS, The Offspring and Lostprophets at the Donington Park site this June.

Also announced today is ‘The Road to Download’ – a UK tour featuring new bands The Devil Wears Prada, A Day To Remember and Alesana leading up to each band’s slot at the festival itself.

The tour runs from London on June 5, ending in Glasgow on June 12, with the festival taking place from June 13-15.

More information about the Road to Download and the festival itself is available from: www.downloadfestival.co.uk

Artists confirmed to play so far for are: