My Bloody Valentine are currently working on a brand new album, according to the band's vocalist and guitarist, Kevin Shields. The band haven't released any new material since 1991's Loveless, which followed their 1988 debut, Isn't Anything. Shields revealed the news in an interview with Pitchfork but admitted he couldn't say much about the new release apart from that "I need to finish it!" 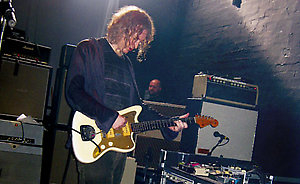 My Bloody Valentine are currently working on a brand new album, according to the band’s vocalist and guitarist, Kevin Shields.

The band haven’t released any new material since 1991’s Loveless, which followed their 1988 debut, Isn’t Anything. Shields revealed the news in an interview with Pitchfork but admitted he couldn’t say much about the new release apart from that “I need to finish it!”

He added that the new album was based on a record that he started making in the 1990s. He said: “I’m just finishing a record that I had started in the 90s. It was going to be, like, the next record.”

He continued: “I’ve always said that we were always going to make a record again. You never know, we might finish it really quickly, and it might be up in a few months! I tend to work really quickly, suddenly, and I might be willing to do that right now. We’ll see!”

Last autumn Kevin Shields launched a new record label, but denied he would be using it to release new material by the band. The reclusive musician set up the new imprint, Pickpocket, with his friend Charlotte Marionneau, initially to put out an EP by her band Le Volume Courbe. Speaking to NME at the time, Shields said: “I was like ‘I’ll just get rid of a few pedals that I’ve had lying around for ten years and we’ll start a label’.”

My Bloody Valentine will put out a trio of re-issues on May 7. Remastered versions of Isn’t Anything and Loveless will go on sale, as well as EP’s 1988-1991, a new compilation made up of the band’s four EP releases, ‘Feed Me With Your Kiss’, ‘You Made Me Realise’, ‘Glider’ and ‘Tremolo’ and seven other rare tracks.