Band say they the record was an 'avalanche of experimentation' 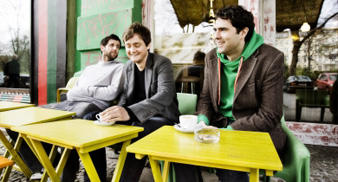 Keane have unveiled details for their new studio album, ‘Perfect Symmetry’, which is due out on October 13.

The English band’s third album, follows on from huge multi-million selling LPs; 2006’s ‘Under The Iron Sea’ and 2004’s ‘Hopes And Fears’ and was inspired and recorded in Paris, Berlin, London and Los Angeles.

Posting details of their album on their website, the group have said: “We took the night train to Berlin, where everything came together in an avalanche of experimentation that took us all by surprise; where we made a pact with Stuart Price to ignore the rules of good taste; where we were hypnotised by Marlene Dietrich and spent many a long night throwing ideas around in the crumbling
Cabaret-esque glamour of our favourite bar.”

The full track listing for ‘Perfect Symmetry’ is yet to be revealed,
but Tim Rice Oxley and co. have mentioned the following song
titles on their website blogs in recent months: