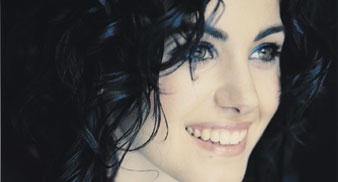 Katie Melua, Britain’s biggest-selling female singer, yesterday set the Guinness World Record for the deepest underwater concert when she performed at the bottom of a 303ft-deep oil rig.

The concert was held at the bottom of a shaft at the Statoil Troll A Platform gas rig, Europe’s largest. They invited Melua to play as part of the gas platform’s 10th anniversary celebrations.

In addition to the gas rig staff, the audience included an adjudicator for Guinness World Records to make sure the record criteria was met.

She performed her hit singles “Closest Thing To Crazy” and “Nine Million Bicycles” with a full live band. Guinness World Records confirmed that the record has been set.

Melua is one of Britain’s most successful exports, having sold more than six million albums worldwide.

The concert was filmed for Norwegian television.

Melua has a new single, “It’s Only Pain”, out later this year.