Kate Bush last night (August 26) made her return to stage after a 35 year absence in a show that begun as a typical concert but evolved into a theatrical spectacular. This report contains spoilers. The three-hour show saw Bush recreate the second side of her classic 1985 album Hounds Of Love as a fully realised stage production, with theatrical sets, costumes, effects and lighting. The same treatment was then given to the second side of her 2005 album Aerial. 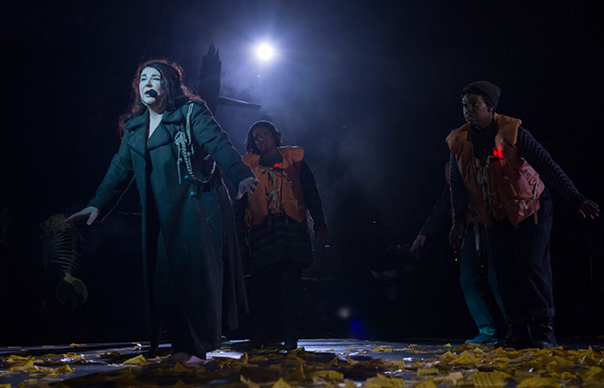 Kate Bush last night (August 26) made her return to stage after a 35 year absence in a show that begun as a typical concert but evolved into a theatrical spectacular. This report contains spoilers.

The performance took place at London’s Hammersmith Apollo, where the capacity crowd brushed with a raft of TV crews and reporters on the way in, such was the circus around Bush’s long overdue return to live performance.

Among the musicians and celebrities in the audience was David Gilmour, who discovered Bush in the late ’70s.

The performance began at 7.45pm, when Bush’s arrival was heralded by a recording of the mantra known as The Gayatri: “O Thou Who givest sustenance to the universe/From Whom all things proceed/To Whom all things return/Unveil to us the face of the true Spiritual Sun/Hidden by a disc of golden Light/That we may know the Truth/And do our whole duty/As we journey to Thy sacred feet.”

As a barefoot Bush led a procession of her five backing singers onto the stage, the entire house rise to its feet in applause. Such was the warmth felt for the 56-year-old, her first three numbers all ended in varying degrees of standing ovation. “You’re lovely,” said Bush after the first. “It’s so lovely to see you all, thank you so much.”

At first, the stage set, lighting and performance were surprisingly traditional. Bush was backed by a seven-piece band, she wore an unassuming outfit comprising black trousers, black top and tassled black jacket, and she bobbed and swirled self-consciously through opening numbers “Lily“, “Hounds Of Love” and “Joanni”.

After a gospel-flavoured “Top Of The City”, Bush stopped to acknowledge her thanks for lighting director Mark Henderson, who she said had been “right here with me since we pushed the button 18 months ago”. She also praised her son, Bertie, who appeared in her band: “Without him, there’s no way it would have happened,” she said. “He gave me the courage to get it started. It’s been a great adventure so far, and it’s really just begun.”

“Running Up That Hill” followed, then “King Of The Mountain”. As the song reached a climax, Bush’s male percussionist strode out to stage front, whirling a corded object around his head as the sound of thunder echoed around the hall. At its end, pieces of paper leaves blasted out into the audience. On them, the words: “Wave after wave, each mightier than the last, Till last, a ninth one, gathering half the deep. And full of voices, slowly rose and plunged Roaring, and all the world was in a flame.”

From this point, the performance of “Hounds Of Love” song cycle “The Ninth Wave” began, starting with a video of a man with a telescope reporting the sinking of a ship named Celtic Deep. “These people are depending on me,” he tells the operator.

The ensuing performance saw Bush become a player in an ensemble cast featuring seamen in life jackets and dancers dressed as skeletal fish, the singer herself sometimes appearing simultaneously on stage and on the big screen, floating in a life preserver in dark waters. Stage trickery and set design was employed to great effect – waves were created with rippling fabric, and the setting of a ship was created with rib-like struts of wood. During “Under Ice”, Bush disappeared from view, only to be pulled from the stage floor once she’d been cut free with a chainsaw. At one point, a helicopter searching for the shipwreck swooped above the audience, shining a powerful beam of light and blowing smoke overhead. At another, a crooked room appeared on stage, in which a boy and his father – the former played by Bertie Bush – were having a banal conversation about what to have for dinner, before Bush appeared to sing “Watching You Without Me”. “The Morning Fog” brought the performance to a close.

After a 20 minute interval, a second narrative was played out on stage with a brand new set: a giant doorway with falling snow, a backdrop of blue sky and the band now arranged at stage left, having moved from the backline. Employing the “Sky Of Honey” suite from the second half of Aerial, it was a piece that used imagery of birds, an artist and an artist’s mannequin – a four-foot puppet brought to life by a puppeteer. Bush underwent a transformation throughout the performance, sprouting blackbird-like wings as the setting changed from day to night and back, and effigies of gulls and owls flew around the stage and screens.

As the hour-long Aerial performance concluded, Bush spent a rare moment onstage alone to perform “Among Angels” on the piano, which she joked had “grown a tree” in reference to a prop remaining from the previous suite. “Thank you so much for the such a warm and positive response,” she said, after a performance in which the audience could have heard a pin drop. Welcoming the band back on stage, Bush ended with “Cloudbusting” from Hounds Of Love.

Kate Bush will perform 22 shows at London’s Eventim Apollo in total, marking her first series of gigs since 1979. All tickets for Bush’s shows sold out in just 15 minutes when they went on sale on March 28, 2014.

‘And Dream Of Sheep’
‘Under Ice’
‘Wake Up (W the W Intro)’
‘Waking The Witch’
‘House, Room Dialogue’
‘Watching You Without Me’
‘Little Light’
‘Jig of Life’
‘Hello Earth’
‘The Morning Fog’

You can read our cover story on the untold story of Hounds Of Love here.

You can read our Kate Bush Album By Album here.