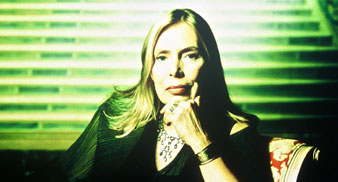 Joni Mitchell has announced that she has come out of self-imposed retirement and is currently recording material for a new album.

In an interview with Canadian regional newspaper the Ottawa Citizen, Mitchell said, “When the world becomes a massive mess with nobody at the helm, it’s time for artists to make their mark.”

She says she aims to help bring “courage through tough times.”

Mitchell is adamant that record companies will not make any money from anything she releases.

The forthcoming album will feature the same musicians she has been working with since 1972’s “For The Roses”, including drummer Brian Blade, saxophonist Wayne Shorter and possibly pianist Herbie Hancock.

Mitchell will play piano, electric and acoustic guitars and synthesizers herself.

The new material that is completed, includes a song inspired by “If”, Rudyard Kipling’s poem standing up for personal integrity. Mitchell has altered it slightly to make the message more relevant.

She also gets political on new song “Holy War”, condemning war waged in the name of religion, and although no names are mentioned, it is clearly an open-ended attack on both terrorist groups and U.S. President George W. Bush.