Liverpool site has got some replicas instead 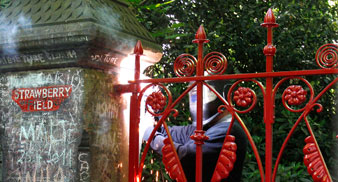 The red gates that inspired John Lennon to write The Beatles‘ 1967 song ‘Strawberry Fields Forever’ have been taken down and put into storage.

The gates had stood on the Strawberry Field site, which was a Salvation Army children’s home in Woolton, since the Victorian era. The charity, which owns the gates, recently put them into storage at a secret location and have erected replicas, reports BBC News.

The site is on the route of some bus tours that showcase the city’s Beatles landmarks, with some organisers up in arms over the move. The site closed in 2005 and its long-term future remains undecided, although the charity hopes to develop a centre for children with learning difficulties there.

Maj Ray Irving, director of social services for The Salvation Army, said: “Although care has been taken to ensure the original gates to the site have remained in good condition, inevitably time has taken its toll. This [replacing them with replicas] means that the original gates can be kept safe from further deterioration and with the replica gates in place, allow for an authentic experience for the many thousands of people who come on a musical pilgrimage to Strawberry Field.”