John Fogerty To Stop The Rain At Glastonbury?

Could Creedence be set to reform for this years' festival? 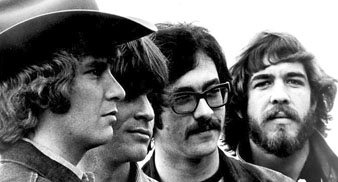 Creedence Clearwater Revival look likely to reform, with the possibility of headlining the Glastonbury Festival, this June.

In a message on his website, founder member and main songwriter John Fogerty has announced that he is set to play.

The message reads: “He will headline the Glastonbury Festival in England on June 23rd. Details on more dates will be posted here soon.”

Although it is highly possible that Fogerty could be headlining one of the stages at this years Glastonbury festival as a solo artist, the chances of a Creedence comeback gig are also good.

At last years festival, organiser Michael Eavis caused a commotion by mentioning that 2007’s line up would feature a band that “officially gave up touring in 1972, a band that were once the biggest band in the world. A band that no one would expect.”

Uncut strongly suspects that he could have been talking about CCR, the band who scored 20 Top 50 hits in their career from 1968-72, before calling it quits due to legal wranglings within the band.

However, reforming the original line up was sadly ruled out in 1990 when Tom Fogerty (rhythm guitarist) passed away, but could John be planning to patch up his differences with surviving members Stu Cook (bass) and Doug Clifford (drums) to perform.

Stu Cook and Doug Clifford have both continued performing and touring the songs of CCR with their own band as Creedence Clearwater Revisited.

We’ll keep you posted with any CCR developments on uncut.co.uk/news