Joan As Policewoman For Club Uncut! 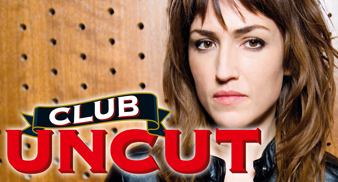 Joan As Police Woman and Pete Greenwood are confirmed to play the fourth Club Uncut which is set to take place on June 30.

After Dawn Landes, Phosphorescent and Okkervil River, we’re delighted to announce that Joan As Police Woman will be headlining Club Uncut. You can read plenty more about Joan Wasser’s marvellous band in this months’ Uncut magazine , but suffice to say, ‘To Survive’ may well end up being one of our albums of the year, so this should be quite a night.

We’re also pleased to say that Joan will be supported by Pete Greenwood, a mighty promising singer-songwriter who also moonlights as guitarist in The Loose Salute and The See Sees. Pete has a solo album out soon on the Heavenly label, and has the honour of being only the second British artist to grace the Club Uncut stage.

Should be good, then. As usual, Club Uncut takes place at the Borderline on Manette Street, just off the Charing Cross Road in London’s glamorous West End. Tickets are available for £13, and you can get hold of them from our exclusive ticket link here.