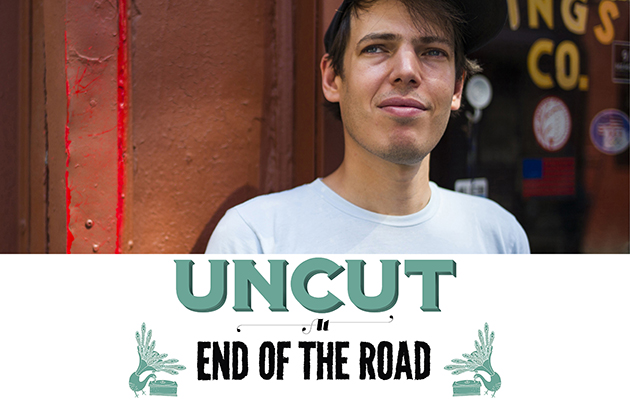 By mid-afternoon, it’s caning it down. By the bucolic Garden Stage, trainers have been unilaterally swapped for wellies, and the first impromptu bin bag/anorak is spotted just by the sound booth. But the slate skies and sheeting drizzle kinda work for the eminently watchable, always entertaining Jeffrey Lewis and Los Bolts. Lewis’ nasal Lou Reed drawl, and songs of wry intelligence, humour and heart, succeed in brightening the mood.

This is a man who knows the power of a song title – he is the brains behind “Don’t Let The Record Company Take You Out To Lunch” and “What Would Pussy Riot Do?”, of course. In this conspicuously English setting he conjures a vision of New York. There’s something of the stand-up about Jeffrey Lewis, and the elaborately prefaced “Sad Old Screaming Man” is simultaneously funny, and slightly terrifying. It’s the tale of a superannuated next-door neighbour given to yelling out in his sleep at night. “I’m in a single-storey purgatory,” he sings, to a bouncy, almost swinging backbeat. It’s incongruous to see people dancing, in yellow wellies no less, when the wicked denouement arrives: “Sad screaming old man… please don’t be me from the future.”

The addition of Los Bolts gives Lewis’ songs some space, and punkish heft, but it’s always the skilful, sardonic lyrics that draw people to him wherever he plays. “Death is like a mystery gift…” runs the opening line to the brilliantly conceived “Whistle Past The Graveyard”, a meditation on the paranormal, Lewis unfolding a self-aware tale of his dislike of contemplating the afterlife. Great stuff.

This is the last date on their zig-zag UK tour – Belgium are getting him tomorrow – and his parting gesture is to serve up “What I Love Most In England Is The Food”. This love letter to British cuisine, which references fish and chips, fried breakfasts, beans, and fireside pub grub is an obvious crowd pleaser. It’s warming, weird, and funny to hear someone so impossibly American celebrate a full-on Sunday roast, in song, on the wettest afternoon in months.