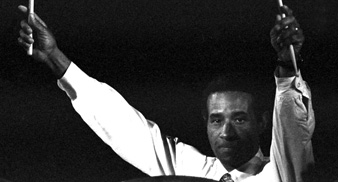 Tributes have been pouring in for the legend, who performed with luminaries such as Charlie Parker, Dizzy Gillespie, Miles Davis and Nat King Cole.

Musician Quincy Jones said: “Thank God he left a piece of his soul on his recordings so that we’ll always have a part of him with us.”

Born in 1924, the drummer quickly progressed to playing with Parker and Gillespie at New York club Monroe’s Uptown House.

Roach and drummer Kenny Clarke are widely thought to have invented bebop, relying more on the cymbals to keep time and so allowing more freedom on the rest of the kit.