Jarvis Is A True Showman At Latitude 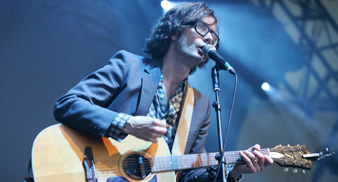 Entertaining the crowd with witty digressions throughout his hour-long set, the full charm offensive of Jarvis was in full effect.

Only having made one solo record, Jarvis performed pretty much everything from it. Plus he gave us a second chance to hear his cover of Survivor’s ‘Eye Of The Tiger’ which he first performed at his own curated Meltdown Festival last month.

For more on the show, click here for Michael’s report in the special Uncut Latitude blo: Jarvis

Uncut’s roaming team of reporters are at Latitude Festival all weekend bringing you up-to-date blogs, news and pictures.
Check out the special Uncut Latitude blog here throughout the day Uncut.co.uk/latitude