Jarvis Cocker, Johnny Marr, Alex Kapranos and Pete Townshend are among a list of musicians who have signed a letter calling on Russian President Vladimir Putin to release Pussy Riot. The President will arrive in London today to meet with Prime Minister David Cameron, who is expected to raise the trial of the band members. 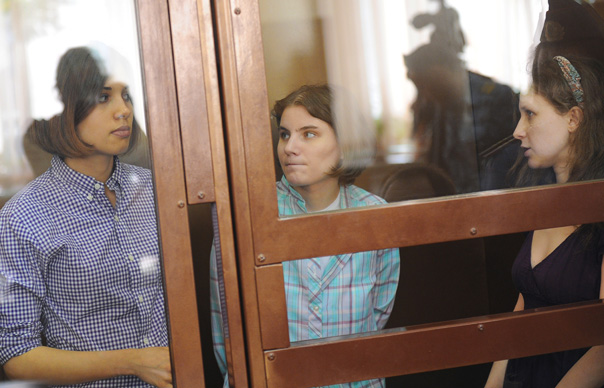 Jarvis Cocker, Johnny Marr, Alex Kapranos and Pete Townshend are among a list of musicians who have signed a letter calling on Russian President Vladimir Putin to release Pussy Riot.

The President will arrive in London today to meet with Prime Minister David Cameron, who is expected to raise the trial of the band members.

Three members of Russian punk collective – Nadezhda Tolokonnikova, Maria Alekhina and Yekaterina Samutsevich – have been in detention since March of this year, after they staged a protest gig against Putin’s re-election. They are currently on trial in Moscow, facing up to seven years in jail on hooliganism charges.

Writing in The Times today, a roll call of artists which also includes Kate Nash, the Pet Shop Boys’ Neil Tennant, Cornershop, Micachu, and The Joy Formidable condemn the “preposterous” charges against the band. They write:

“We are extremely concerned about the treatment [Pussy Riot] have received since their arrest and during their trial. We feel that a minor breach of the peace for an incident at the Cathedral of Christ The Saviour in Moscow in February was a legitimate protest.”

The musicians add: “Dissent is right in any democracy and it is entirely disproportionate that they face seven years in jail for what we consider a preposterous charge of ‘hooliganism motivated by religious hatred'”.

At the start of their trial this week, the three women were led into court in handcuffs and locked into a cage of bullet-proof glass. In court, Tolokonnikova said they would not plead guilty, but that did not mean they were not prepared to apologise for the pain their performance in the cathedral had caused.

Earlier this week, other members of the group claimed that Putin is frightened of them. One member, known as Squirrel, said: “Putin is scared of us, can you imagine? Scared of girls. The most important dictator, Putin, is really afraid of people.”

She added: “More specifically, he’s afraid of Pussy Riot. Afraid of a bunch of young, positive, optimistic women unafraid to speak their minds.”

Franx Ferdinand have previously voiced their support for the band at gigs in Moscow along with the Red Hot Chili Peppers.

The three women were arrested following an impromptu Pussy Riot performance at Moscow’s Christ The Saviour Cathedral, where the band sang a song called “Holy Shit” as a protest against the Orthodox Christian church’s alleged support for Putin. Although Putin regained power in the last Russian election, the verdict has drawn accusations of fraud by his competitors.

Shortly before their arrest, members of Pussy Riot spoke to NME, calling Putin’s reaction to their church protest “childish”. “We knew what the political situation was but now we’re personally feeling the full force of Putin’s Kafka-esque machine,” they said. “The state’s policy is based on a minimum of critical thinking and on a maximum of spite, and a desire to get even with those who don’t please it.”

Amnesty International have called for the release of the band members, arguing that they are “prisoners of conscience”.