Is SAW III The Scariest Film ever? 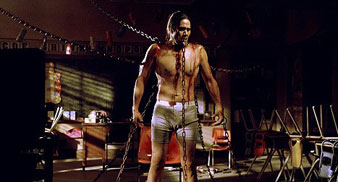 Reported today on the BBC news website, the Cineworld complex in Stevenage, Hertfordshire had to call on ambulance services three times last Friday (October 27)- the film’s opening night – to help with three separate incidents of fainting during a showing of “Saw III”.

One woman was taken to hospital whilst two others were treated onsite by medics.

It has also been reported that a man collapsed at a cinema in Peterborough, also on Friday”due to the films content.”

The blood-filled film directed by Darren Lynn Bousman has an 18-rating for “strong grisly violence and gore, sequences of terror and torture, nudity and language.”

A spokesman for the East of England Ambulance Service warns simply, “If you know you’re squeamish, don’t go.”

The gory movie is number one at both the UK and North American box offices.