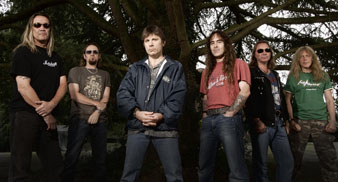 Iron Maiden are to release a limited edition Digital single on December 26.

The band have been touring their acclaimed 14th studio album “A Matter of Life and Death” in the US since release in October, where it entered the Billboard charts at number 9, the first time they have ever entered the US Top 10.

As a finale for the tour which ends with two shows at London’s mammoth Earls Court Arena on December 22 and 23, they will release the special digital single “A Different World” – a live version taken from the current European tour.

This exclusive live version is in MP3 format. It is compatible with all computer formats and is available only through pre-order at the Iron Maiden Store online.

It can be downloaded on release day, December 26, after which the format will be deleted.

Steve Harris, bassist, says about the forthcoming single, “We’re having a fantastic time on this tour and the fans everywhere have been absolutely brilliant. The reaction to us playing the entire album from start to finish has been amazing. We’re releasing this single with live tracks specially recorded on the tour, and our own version of Focus’ ‘Hocus Pocus’ to celebrate all the fun we are having.”

As well as the digital format Iron Maiden are releasing a limited edition DVD single and limited edition 7” picture disc – with the new song “Hocus Pocus” – and all come with previously unreleased live recordings.

You can catch Maiden supported by Trivium at the following UK venues next month: