Iron Maiden Return To India On Final Leg Of Tour

Ed Force One also to fly into New Zealand, Dubai and South America 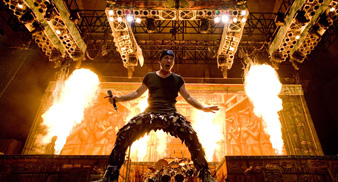 Iron Maiden have announced the fourth and final leg of their Somewhere Back In Time tour, which begain in Mumbai in February this year.

The band will return to India next year, with a show in Bangalore at Royal Challenge Rock on February 15. Iron Maiden also plan to fly their custom plane, the Ed Force One, to New Zealand for two shows on February 20 and 21, the band’s first shows on the islands in 16 years.

Iron Maiden have also announced three shows in Mexico for February 25, 26 and 28, with more South American dates still to be announced.

Bruce Dickinson, singer and airline pilot comments on the tour, saying that they plan to take time off when it’s over to work on the next album.

He says: “Taking Ed Force One around the planet and playing to our fans in so many different countries was an incredible experience for all of us. For me personally, flying and performing was one of the most challenging and satisfying things I’ve ever attempted despite the rigours and all the logistical difficulties we encountered.

“In fact it was so much fun we decided to do it again as a final leg of this tour. All in all this will be a fantastic way to round off a tremendous year for the band before we take a bit of time off and then start work on a new studio album.”

Pre-sale and ticket information is available from the band’s official website, ironmaiden.com