Iron Maiden Go Back In Time For Ambitious New Tour

First stop is a return to OZ after 15 years 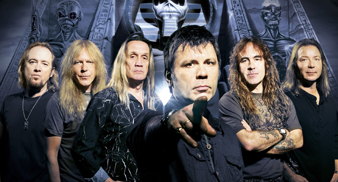 Iron Maiden have today (September 6) revealed their most ambitious tour plans yet.

The ‘Somewhere Back In Time‘ world tour will see the band traverse the world – with the band kicking off proceedings in Australia in February – the first time the rockers have returned to play there in fifteen years. They last played Australia in 1992, when they took their ‘Fear of The Dark‘ tour there.

The first leg of the tour will Maiden play 20 cities on five continents including India, Japan, North, Central and South America, as well as Oz.

The second leg from May through June will see the band play more dates across North America – before the third leg hits Europe in July.

The band are due to bring their 60-strong crew and 12 tonnes of stage equipemnt to over one and a half million fans and travel close to 100,000 miles by the time 2008 is done.

The band and crew will be travelling the globe in a specially converted Astraeus Boeing 757 decorated with Maiden and their mascot Eddie.

In possibly a world first, Maiden singer Bruce Dickinson, also a qualified pilot – will be flying the plane for Astraeus Airlines.

Dickinson says: “By taking band, personnel and equipment in one form of transport it makes all the touring so much easier and overcomes the logistical difficulty of people and equipment going in different planes. We can even work out exactly how big our carbon footprint is and take care of that responsibility.”

The ‘Somewhere Back In Time’ tour will revisit the band’s history, with a trip back to the 80s – songs and stage sets will focus on that era.

The elaborate shows planned for 2008 will see a stage set based on the Egyptian production of the 1984/85 ‘Powerslave’ tour – with the addition of ‘cyborg’ Eddie from the ‘Somewhere In Time’ tour of 1986/7.

Tickets for the first dates of the tour in Australia go onsale September 27, with fan club members able to get priority booking from September 20.

Dates annouunced so far are:

Go to www.ironmaiden.com for further information and tour updates.