The complete story of a guitar god! 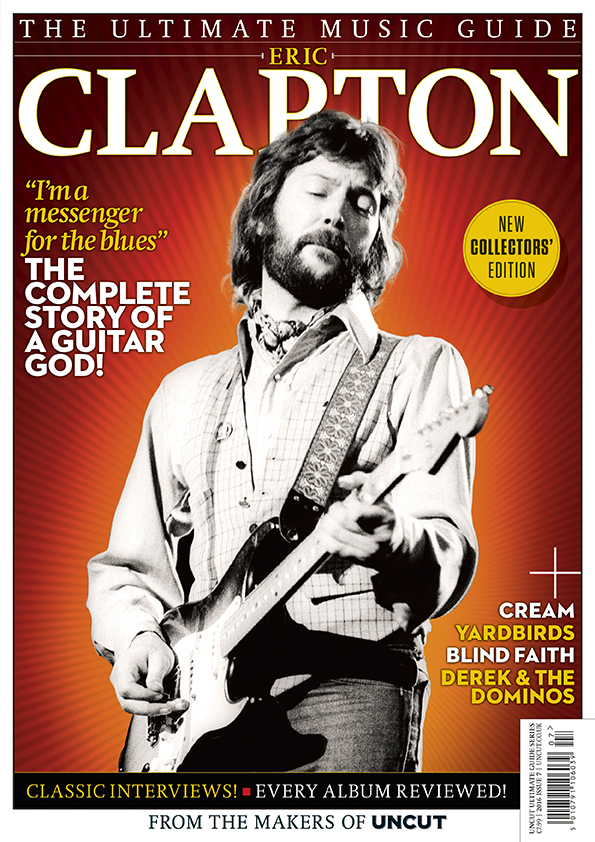 Has a god ever strived harder to be mortal than Eric Clapton? As we were piecing together our Clapton Ultimate Music Guide (on sale in the UK on Thursday, but available from our online shop now), that question kept running through my mind. Here, after all, appeared to be a guitar hero who tried to disappear into the ranks. A blues purist who kept finding himself at the forefront of musical revolutions. An everyman so gifted that he couldn’t help but become a superstar, even as he tried to run away from it. This is, perhaps, the paradox of the man they called God: no matter how many style changes and sidesteps he has made, his genius has always remained visible to extraordinary numbers of true believers.

“It’s one of my character defects that the best party is always down the road,” Clapton admitted to Uncut’s Nigel Williamson in 2004. “When I get what I want, I don’t want it any more.” He was talking specifically about the end of Cream, and about how Jack Bruce and Ginger Baker “had a lot more respect for what we were doing than I did.” The welcoming bonhomie of Delaney, Bonnie and friends would soon embrace him, and lead him down a path of making the kind of unadorned, communal music, rooted in American tradition, that would make him happiest – and, of course, make millions of other people happy, too.

Soon enough, though, the Clapton myth would hit further complications: an epic love story, full of harrowing twists to be memorialised in song; a litany of addictions; a controversial habit of speaking his mind. “I was fed up with being nominated all the time,” he tells Melody Maker in 1978, exhausted with the burden of being our Greatest Living Guitarist. “It was just getting on my nerves. How can you live with that on your back? You can’t. It’s best just to be A Musician.”

Here, then, is the complete story of A Musician, albeit one who worked his way through five epochal bands before he was 26, and then embarked on one of the most cherishable and enduring of rock solo careers. For this expansive Ultimate Music Guide, we’ve taken our usual trip into the archives and come back with a wealth of long-lost interviews from NME and Melody Maker. They stretch from the hesitant first steps of The Yardbirds, through the volatile supergroups era of Cream and Blind Faith, and on into a solo career where encounters veer from drunken tragicomedy to moments of great reflective wisdom. We’ve also revisited every one of Clapton’s albums to provide a comprehensive survey of his career; a career which, observed from the vantage point of 2016, is a lot more consistent than even the guitarist himself might credit.

In the words of his great compadre, JJ Cale, he’s got that green light, babe. He’s got to keep moving on…