We celebrate glam rock in the first of our new series 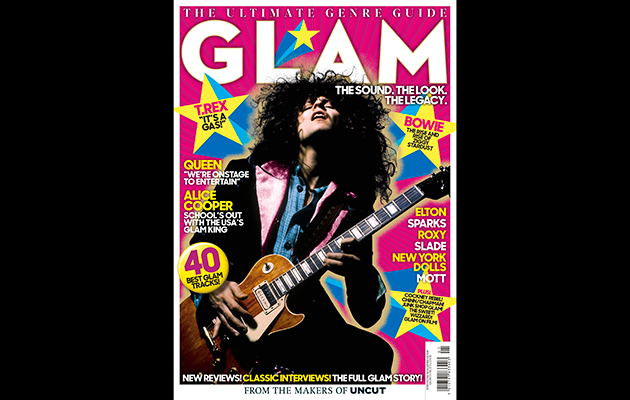 In the current issue of Uncut, Phil Manzanera looks back at the early days of Roxy Music. Among many things, he considers the slick visual presentation deployed by Roxy around the time of their debut album – cricket jumpers, diamanté-studded fly sunglasses, feather boas and all.

“Prog was the antithesis of showing off and dressing up,” he explains. “Getting to 1972, there was that period when all that came to  a grinding end because of drugs – heroin killed everything, and everything became grey. And there was no showbiz element, which there had been with Tamla Motown and The Beatles, so with Bowie and with us it was going into colour and being flamboyant and having fun, but with some decent music. We never thought we were glam rock. Marc Bolan and Bowie had started quite a few years earlier and had been trying to find their thing; we came out of nowhere with an already-formed thing.”

It’s a useful, insider take on the context around which Roxy, Bowie, Bolan and many more besides evolved during the early Seventies, where “being flamboyant and having fun” seemed as critical to the creative process as it did a reaction against the more studied, unapologetic complexities of prog. Roxy’s splendid debut album is about to be released as a super deluxe box set – and, by timely coincidence, Uncut celebrates glam rock in the first of our new series, The Ultimate Genre Guide, which goes on sale this Thursday in the UK and is available to pre-order from our online store.

Here’s John Robinson, who edited this one, to explain more…

“As you will discover when you read this stomping new publication, there were many ways to be glam. Conceptual, like Roxy or Bowie. Flashy, and made for colour television, like Slade. Theatrical, like Alice Cooper, or chaotic like the New York Dolls. For our cover star Marc Bolan it was the fulfilment of childhood dreams of stardom – and fuel for the dreams of others.

“Perhaps more than anything else, it could be a key to reinvention and self-discovery. Roy Wood was a joint-passing hippy before he became the glitter-bearded star of Wizzard. Mott The Hoople were longtime triers about to quit, given another shot when they performed Bowie’s ‘All The Young Dudes’ – essentially glam’s national anthem. Elton John began the 1970s as an earnest balladeer, and was possibly more a glam rocker from expediency than anything else. Still, it allowed him to access elements of his showmanship, sexuality and general high spirits than he had previously managed.

“As the 1974 meeting with NME’s Charles Shaar Murray included here makes plain, Elton in some ways embodies glam’s improbable hotline connection between pure showbusiness and the man in the street. Having once changed his birth name from Reginald Dwight, he tells Murray that he’s now giving thought to a new middle name: Hercules (although he ‘could have called myself Fiona, I suppose. Elton Fiona John. Or Dalmatian.’) Stephen Dalton’s commentary details not only Elton’s glam recordings but also recounts several gossipy years of cattiness and fallings-out.

“There was no one way to be glam. There were some recognisable features – the intersection of ambiguous sexuality and hard, often 1950s-inspired rock; an emphasis on performance, posing and showmanship; great singles – but this was no straitjacket.

“Some artists – like Lou Reed or Iggy Pop – drifted into glam, took what they wanted and moved on. The lesser talents had their brief moment basking in its reflective glow. All round, it offered freedom, not confinement. (Unless you were The Sweet, of course – for whom the whole experience turned into a struggle for independence from their production team.)

“As David Cavanagh points out here in his writing about glam singles, not everyone could be as talented as David Bowie. Glam offered both the sublime and the ridiculous, whether that was the stellar run of albums Bowie made between 1970 and 1974, or a one-off exploitation single by one-hit wonders we’d now find filed under ‘junk shop glam’.

“You can read about all versions of the glam experience here, in a range of hilarious archive features – just who were Hair, Nose & Teeth? – and insightful new commentary. There are thoughts on glam film, glam art and glam’s legacy. You’ll read how our artists – from Bowie, Bolan and Slade through to Queen and Sparks (by 2018, glam’s only real survivors) – made, and were remade, by glam rock.

“So catch a bright star and place it on your forehead… and there you go.”