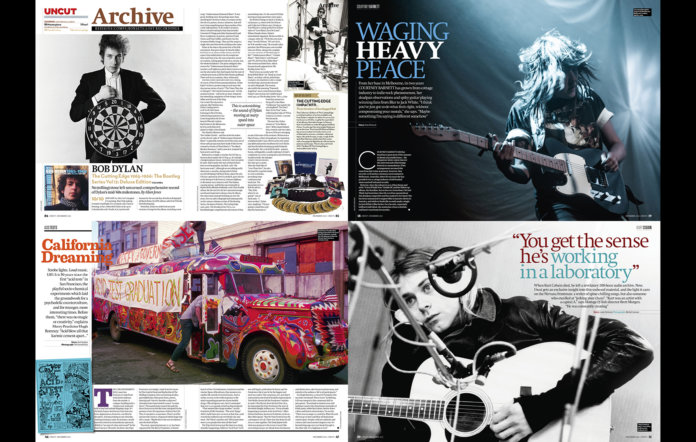 It was a long time ago now, but I dimly recall part of my English degree involved comparing the various quirks and emendations of Shakespeare’s plays in the Folio version and the Quarto version; scholarly anal retention at its finest, I guess. Weirdly, though, I was thinking about that process a few weeks ago in the office, while we were working our way through The Cutting Edge 1965 – 1966: The Bootleg Series Vol. 12 – or at least the 6CD version of this new Bob Dylan boxset that Allan Jones reviews in today’s new issue of Uncut. It’s a strange experience, listening again and again to “Like A Rolling Stone” (there are 20 versions of it here), hearing the microscopic adjustments in tempo, the distinctions in guitar tone, the presence and absence of organ lines.

I’m aware that drawing parallels between the likes of Shakespeare and Dylan is a hazardous, often pretentious, business, but perhaps this is where we are with rock archaeology right now. Part of the pleasure of expansive projects like The Cutting Edge – and, indeed, like Montage Of Heck, the new Kurt Cobain album that we investigate in this month’s cover story – is that they turn us all into historical detectives, or at least privileged critics; that the act of listening becomes more active than passive as you become involved in piecing the story of a song together, in analysing its gestation.

Of course, this isn’t always the way I’d choose to engage with music, and it’d be disingenuous to pretend I’m going to play The Cutting Edge more frequently than I do, say, Blonde On Blonde. Nevertheless, as with many of these archival projects, innumerable new angles on old stories materialise. Just when you think you know everything about these most canonical of songs, another take on “Tombstone Blues” is cued up, and a new avenue of exploration reveals itself.

Dylan, it transpires, never had a fixed idea of how a song should work; his music has always been, and of course continues to be, in a constant state of adaptation and flux. We might see the single version of “Like A Rolling Stone” as the ultimate manifestation of Dylan’s art. Dylan himself, one suspects, would see it as just one of a number of almost infinite possibilities. Which is why he’s so perfectly suited to encyclopaedic boxsets like this one.

There are plenty of new things to engage us in this month’s Uncut – albums by Floating Points, Kelley Stoltz, Nadia Reid and Bitchin Bajas are strong personal favourites – but until Neil Young finally gets around to releasing Archives 2, whenever that may be, there’s plausibly enough here to obsess over. It’s a question of degrees. Good luck with your studies…