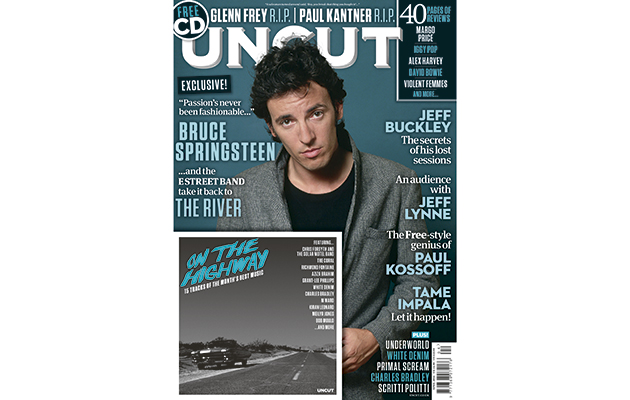 It’d probably be a sound professional move on my part to claim that the new Uncut, out today, was carefully timed to coincide with the announcement of Bruce Springsteen & The E Street Band’s UK tour dates in May and June (tickets go on sale Thursday, I think).

In truth, though, our exclusive cover story is more of a serendipitous accident. Jason Anderson took in a couple of shows in New Jersey and Washington, and interviewed the band about the US the current tour (“You get your aches and pains and everything else,” says Max Weinberg. “The next morning, I might look like Nick Nolte in North Dallas Forty when he gets out of bed, but during the show I’m like a 15-year-old kid – I’m just going for it.”), about “The Ties That Bind”, and about “The River” itself. There is, “Fun, dancing, laughter, jokes, politics, sex, good comradeship, love, faith, lonely nights, and, of course, tears…”

There are also memories of what Roy Bittan remembers ruefully as an “arduous process”: “It’s not like he wrote 12 songs and we recorded 12 songs and we put out a record.”

“You kinda give up and enjoy the ride,” Steve Van Zandt agrees. “You say, ‘Fuck it – this thing is not gonna stop. Can it be a triple disc? A quadruple disc? What are we allowed to do here?’ I mean, it’s a legitimate four-disc album. We would’ve beat George Harrison’s three. Everything sounded great every day. We could’ve been recording that thing forever and just enjoyed it – at least until the money ran out.”

Oh, and a big piece about Jeff Buckley. Given the controversy that our recent Top 200 Albums Of All Time list seems to have caused, I guess I should be wary of using the words “Greatest” and “Ever” in too close proximity to one another. Still, working on this issue of Uncut, I was reminded that whenever I’m asked about the greatest gigs I’ve ever seen, I always mention a night spent with Jeff Buckley in 1994.

In the 1960s, Bunjie’s coffee bar, just off London’s Charing Cross Road, was a hang-out for Dylan and Paul Simon. By the mid ’90s, the subterranean nook was an anachronism, but on March 18, 1994, it hosted one last legendary show. Enthralled by an advance copy of Jeff Buckley’s debut EP, “Live At Sin-E”, I’d travelled to New York the previous month to catch one of his solo shows, and been stunned by what I saw. When he fetched up on this side of the Atlantic in mid-March, I suppose I stalked the poor guy.

On March 15, Buckley played a short support set to a few amazed insiders at the Borderline. Two days later, aesthetes were virtually scrapping to get into a claustrophobic show Upstairs At The Garage where, legend has it, John McEnroe carried Buckley’s amp. The next night found Buckley in Bunjie’s cellar, distributing white roses to the lucky few of us who’d managed to scam our way in. Bunjie’s was too hardcore to bother with mics, and the somersaulting range of Buckley’s voice was more apparent than ever.

He played for an hour or so, and wanted to play longer, but the venue was closing. Then someone came in and said he could carry on at the 12-Bar, another muso club just down the road. Buckley marched out of the club carrying his guitar, and we all followed him with our roses. Even at the time, it felt like we were living out a romantic fantasy. At the 12-Bar, Buckley tried to play every song he’d ever heard: The Smiths, Led Zeppelin, some heartfelt Liz Frazer and Nusrat Fateh Ali Khan impressions, until he pretty much had to be carried off the stage.

There have been times when I’ve questioned my memories of the whole evening, which is one of the reasons I’m thankful for the arrival of a new Buckley collection, “You And I”, and Graeme Thomson’s feature about it. Many of the songs that Buckley played at the 12-Bar turn up on “You And I”, dating from a February 1993 recording session in New York.

“I was sucked in by his voice and guitar playing,” his A&R man, Steve Berkowitz, tells Graeme. “The way he was singing and playing these songs, which were mostly covers, seemed fully orchestrated. Yet it was casually done, it seemed spontaneous and unrehearsed.”

He believed, I suppose, his time had come…