Introducing… The History Of Rock 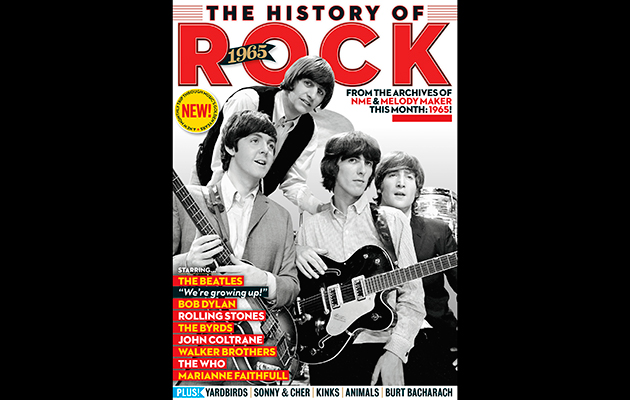 The big news yesterday, that my old home the NME would be undergoing a major brand transformation, was greeted with a lot of nostalgic meditations over yellowing old newspapers. Whenever I had a look at Twitter, people on my timeline were tweeting their favourite NME covers: no-one, as far as I could see, picked one of the stranger highlights of my career there, when we put Godspeed! You Black Emperor – or rather, a gothically intense Godspeed quote – on the front page.

It’s a serendipitous time, anyhow, for us to unveil our own little publishing revolution. This Thursday, the first edition of The History Of Rock hits newsstands in the UK, though you can already buy it online here. It’s the first in a new monthly series that draws from the archives of NME and Melody Maker to discover how the key stories of rock’s golden years were told at the time. For anyone who’s interested in musical history, or indeed the history of music journalism, we hope it’ll be an essential read: we’re splashing out on some notably lavish production values for each issue, so that they feel even more rich and collectable. What was yesterday’s fish and chip paper has become, magically, today’s luxurious encyclopaedias.

The History of Rock – on sale Thursday July 9! https://t.co/PPPzMaRV2e

Our story starts with a look at the momentous events of 1965. Here’s John Robinson, who’s doing all the heavy editorial lifting on The History Of Rock, and has become kind of besotted with the hip catchphrase “LP Winner!”, to introduce his handiwork…

“Welcome to 1965. As the year dawns, the personalities who will define much of the music of the next 50 years – be that The Beatles, Bob Dylan, or the Rolling Stones – are all still in their early 20s. They are already working at an extremely high level, producing classic work like “Help”, “Highway 61” and “Satisfaction”. In their wake, a second wave of innovators are busy determining their own paths, inspired by the work of others (“they knocked us out” is a phrase you’ll read a lot) and their own unique visions.

“The music writers of New Musical Express and Melody Maker were there with them all. These were not by any means the faintly dandyish figures of the following decades. Rather, these were diligent newspapermen with musical leanings; dedicated record “trade” professionals who uncovered pivotal detail by their fastidious reporting of music events. They skilfully captured the major personalities up close, at a time where music – and along with it, music writing – was undergoing rapid change.

“This is the world of The History Of Rock, a new monthly magazine and ongoing project which which reaps the benefits of this access for the reader decades later, one year at a time. In the pages of this first edition, dedicated to 1965, you will find verbatim articles from frontline staffers, compiled into long and illuminating reads. You will be present as enduring reputations (“the witty Beatles”; “the battling Kinks”) are formed, but also to discover fascinating byways off the main track.

“You will recognize many of the names, faces and places here, but you’ve perhaps never quite seen them quite so innocently, or so intimately in their time. Here, Carnaby Street is still a fashionable destination. A Rickenbacker guitar, as advertised by John Lennon, will cost you 150 guineas. Andrew Loog Oldham seems to have a hand in everything. America? America is spoken of as an extremely remote place indeed, and a sense of spirited transatlantic competition thrives in the language of much of the reporting.

“What may surprise the modern reader most is the access to, and the sheer volume of material supplied by the artists who are now the giants of popular culture. Now, a combination of wealth, fear and lifestyle would conspire to keep reporters at a rather greater length from the lives of musicians.

“At this stage, however, representatives from New Musical Express and Melody Maker are where it matters. At John Lennon’s dinner table. Being serenaded by John Coltrane in his hotel room. In a TV studio with the Rolling Stones.

“Join them there. You’ll be knocked out!”