Introducing… The History Of Rock: 1967 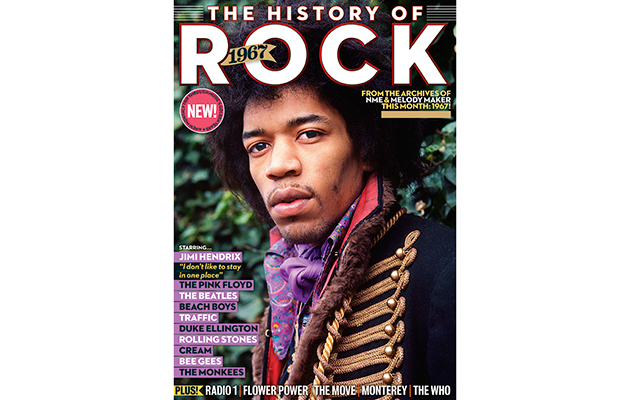 Thanks for all the kind words you’ve had to say about our Fleetwood Mac Ultimate Music Guide, that I launched here last week. This time out, we have the latest volume of our History Of Rock project to plug, which deals with the momentous events of 1967. History Of Rock: 1967 is in the shops already, and you can order a copy at our online shop. But in the meantime, here’s John Robinson to introduce the issue…

“Welcome to 1967. In the popular imagination, this is a year defined by its summer – a summer not announced by warmer weather, so much as by the Beatles release of Sergeant Pepper’s Lonely Hearts Club Band in June, and continuing through singles like their own ‘All You Need Is Love’, ‘Itchycoo Park’ by the Small Faces and Traffic’s ‘Hole In My Shoe’. It is also a more symbolic season, in which the tentative drug dalliance, conceptual thought and musical explorations seeded in the previous year all burst into vibrant colour. Or, in the case of the Jimi Hendrix Experience, into flames.

“Bands are leaving the cities. They are growing (and shaving) moustaches. Fans are following them in greater numbers not to scream, but to mingle with them as something like equals, to listen and watch the lightshow. An American city, San Francisco, becomes the spiritual home of this development – generally called ‘Flower Power’, which George Harrison goes to witness in person – and quickly, of its kitsch. The ‘genuine people’, as Graham Nash observes, have already gone elsewhere.

“The Beatles make influential music in 1967, but it may be the Rolling Stones (for whom this is not considered a vintage year) who are the avatars of the culture. In January, Brian Jones tells the world that something called ‘the age of Aquarius’ is coming. It is the sentencing in July of Mick Jagger and Keith Richards that threatens to bring the summer’s idyll to an end. The band’s return with ‘We Love You’ offers a new and ironic note of defiance for the autumn. Come the winter, Jagger will be telling reporters that Satanic Majesties is ‘just another album’, as the year’s costumes are removed and put away.

“The staffers of NME and Melody Maker were there with all these musicians, increasingly for longer periods. Transatlantic travel is fractionally more common, and when the opportunity arises, American groups are visited in their own surroundings. Making music has come to reflect an entire lifestyle, and travel of one kind or another is broadening the mind.

“This is the world of The History Of Rock, a new monthly magazine and ongoing project which reaps the benefits of this access for the reader decades later, one year at a time. In the pages of this third edition, dedicated to 1967, you will find verbatim articles from frontline staffers, compiled into long and illuminating reads. Missed an issue? You can find out how to rectify that here.

“What will surprise the modern reader most is the access to, and the sheer volume of material supplied by the artists who are now the giants of popular culture. Now, a combination of wealth, fear and lifestyle would conspire to keep reporters at a rather greater length from the lives of musicians.

“At this stage, however, representatives from New Musical Express and Melody Maker are where it matters. At Monterey with Brian Jones, or looning at UFO. Talking Coronation Street with the Monkees. They are with Traffic, awaiting a delivery of poached eggs.

“Join them there. You’ll flip on it.”