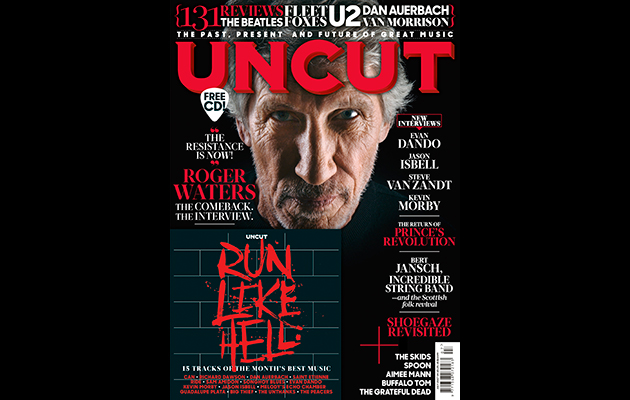 A new Uncut manifests itself this week (it’s in UK shops on Thursday, but should be turning up with subscribers any moment now) and, as you’ll see, our cover star is Roger Waters.

The small matter of 25 years after his last rock album, an urgent, raging Waters has returned, with much he needs to say. Is This The Life We Really Want?, according to producer Nigel Godrich, gives Waters a “reboot in the same way The Force Awakens gave Star Wars back to the fans.” And in our exclusive interview, Waters elucidates. “It’s not much of a leap from ‘Is This The Life We Really Want?’ to ‘Money’, ‘Us And Them’ or ‘Welcome To The Machine’,” he says. “They’re all interconnected in ways that are… unsubtle.”

There’s plenty to talk about, of course, as Pink Floyd’s retrospective exhibition opens at the V&A in London and Waters plots his imminent Us + Them live extravaganza. In a wide-ranging conversation with Michael Bonner, Waters touches on Floyd and The Beatles, 9/11, Brexit (“All through my youth I fought the Farages of this world”), Bernie Sanders and, of course, Donald Trump. “There’s a resistance everywhere,” he says. “I want people who come to the show, particularly in the United States Of America, to understand that what I’m doing is symbolic of the general resistance to the absolute inhumanity of the status quo.”

While he might look like a workaholic compared with Roger Waters, Evan Dando is another rock legend whose music has become frustratingly sparse in recent years. Unlike my illustrious predecessor Allan Jones, my reserves of rock’n’roll anecdotes are pretty skimpy, but most involve Dando. I once interviewed him at the Chateau Marmont in Los Angeles, sat late at night by the deserted swimming pool. If this weren’t decadent enough, the whole process was farcically hampered by the fact that Dando couldn’t actually speak, and had to respond to all my questions by scrawling his answers on a legal pad. In the throes of finishing Come On Feel The Lemonheads, his doctor had advised Dando to completely rest his voice, following damage done by smoking crack and heroin. “I don’t think I would want to die young of drugs – but I’m not sure,” he wrote to me. “Just maybe better than putting out 10 Lemonheads album.”

Twenty-four years later, Dando has only managed three more Lemonheads albums, plus one undervalued solo album – 2003’s Baby I’m Bored – that gets a deserved reissue this month. His thin discography is compensated, though, by the fact he’s very much still with us: a bright, complex, seemingly irrepressible 50-year-old who emerges, in Stephen Deusner’s exemplary profile this issue, as an artist whose creative spirit doesn’t require being portioned out into regular releases.

It’s an interesting contrast with another of this month’s featured artists, Kevin Morby, whose burgeoning reputation as singer-songwriter in the lineage of Dylan, Cohen and Reed rests on a hot streak of four albums in the past four years. Also in the issue, we talk with Jason Isbell and Steve Van Zandt; revisit the fervid Scottish folk scene of the 1960s (Incredible String Band, Bert Jansch, Anne Briggs all featuring prominently); lose ourselves in a nostalgic salute to the shoegazing greats; watch the reunion of Prince’s mighty Revolution; and uncover the story of The Skids’ “Into The Valley”. We sift through key new albums by Fleet Foxes, Buckingham/McVie, Sufjan Stevens, Richard Dawson, Chris Stapleton, Dan Auerbach and Saint Etienne, and there’s a surfeit of headline reissues in the Archive section, from Van Morrison, U2, Billy Mackenzie and, last but probably not least, The Beatles.

May we introduce to you some acts you’ve known for all these years, and maybe help you look at them a little differently?