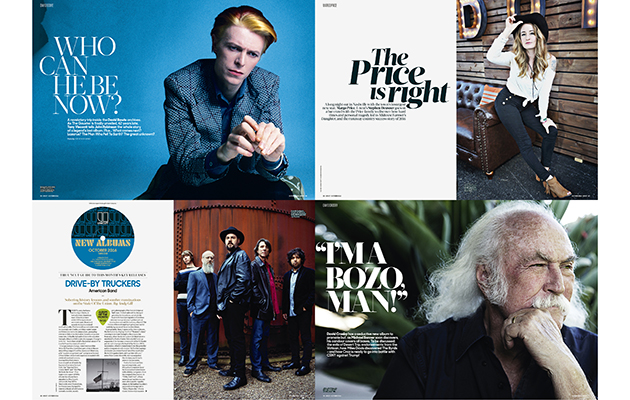 Welcome to the new Uncut! As you might have noticed, we’ve spruced things up a little bit. The idea is really to give the place a new lick of paint, as it were; behind our stylish David Bowie cover, the biggest change is that we’ve moved the reviews section to a much more prominent position. As John’s written in his Editor’s Diary blog, the shift emphasizes a critical part of our remit here at Uncut: to champion new music and to place it within the broader context of the rich, musical traditions that we love. For our free 15-track CD, we thought we’d compliment this relaunch issue with a new volume of Sounds Of The New West – our much-loved series of compilations stretching back to 1998. The Class Of 2016 edition features Margo Price, Jason Isbell, Hiss Golden Messenger, Sturgill Simpson, Hurray For The Riff Raff, Drive-By Truckers and many more. It’s out today (23 Aug) or you can download it.

We’d love to know what you think of the new look. The address, as ever, is: uncut_feedback@timeinc.com.

What can I tell you about the contents of the issue, then? In the past few weeks there has been plenty of speculation about David Bowie’s ‘lost’ album, The Gouster. Nothing, however, has been assembled that is quite as comprehensive as our 11-page cover story. Tony Visconti talks John Robinson through the making of this album in astonishing detail, illuminating Bowie’s remarkable working practices. There are 20-page telegrams, conceptual feedback and a love of early R&B records. “With David’s music,” Visconti tells us, “you have to be on your toes.” We also take a revelatory trip into Bowie’s archives and look ahead to what come next. “David was so in control in terms of the creative,” we learn.

Elsewhere in the issue, Stephen Deusner enjoys a long night out in Nashville in the company of Margo Price, David Crosby tells me that he’d happily go out with CSNY on an anti-Trump ticket (among other things), Damien Love talks to Lou Reed’s bandmates and confidants about the sordid madness behind the Street Hassle album while Tom Pinnock discovers how a gang of psychedelic tailors helped shape the culture of Swinging London.

In our regulars, Devendra Banhart talks about hard times on the streets of Paris, military coups in Venezuela and the alien lifeforms within us in An Audience With…, The Turtles remember the Making Of “Happy Together”, Van Der Graaf Generator recall their deep, intense musical journey in Album By Album, and King Creosote’s Kenny Anderson shares his favourite songs in My Life In Music.

In film, meanwhile, I review The Beatles tour documentary, David Mackenzie’s neo-Western Hell Or High Water, Viggo Mortensen indie-spirited Captain Fantastic, Ira Sachs’ Little Men and the new Chills doc. In DVD, we revisit Alex Cox’s Sid & Nancy and check out a new Killing Joke doc. In Live, we review LCD Soundsystem and Frazey Ford while in Books Allan catches up with Mike Love’s autobiography and a new (excellent) memoir about his time in Spacemen 3 and Spiritualized by Will Carruthers.

There’s more, of course. In the front section, we showcase some unseen Kate Bush images, Wizz Jones remembers his old friend John Renbourn, Pete Wylie returns and we introduce Noura Mint Seymali, the new African queen of desert blues. We also preview the highlights of this year’s End Of The Road festival.

Taking of which, if any of you are going to End Of The Road, you might want to keep checking back on Uncut’s Facebook and Twitter feeds as we count down to this year’s festival with a series of archive interviews from this year’s fantastic line-up.