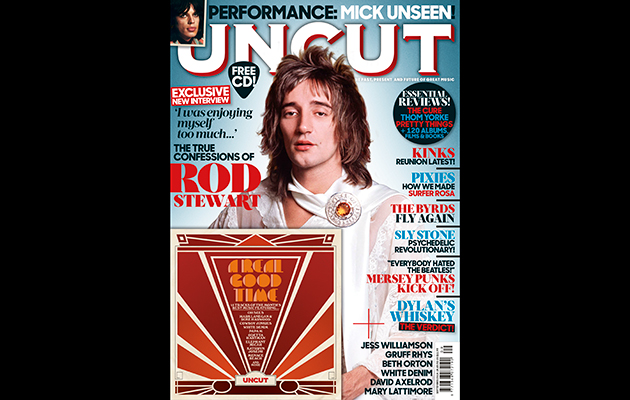 To Southern California, then, for a revelatory new interview Rod Stewart. We found Stewart at home with the football on – Argentina versus Croatia – but despite such lively distractions, he proved to be an attentive and genial host. There are splendid war stories, of course – one of them involving the Faces, a hotel room and a brass bedknob – but Stewart was also particularly strong on his folk roots, his abiding love of Bob Dylan and the pioneering work of the Jeff Beck Group. He tells us about upstaging the Grateful Dead, tormenting John Peel and being threatened with a knife by an august bluesman. But he is candid, too, about success, his songwriting and which one of his many hits owes a debt to a Lou Reed song… Did I say there were also good yarns? Yep, there’s loads of those, too. And we got to see his model railway. The issue goes on sale this Thursday, July 19 – but you can buy a copy now and have it sent direct to your home (free postage and packing, no less!).

Elsewhere, Tom Pinnock catches up with Pixies in New Orleans to discuss the making of their glorious debut, Surfer Rosa, which turns 30 this year. Rob Mitchum talks to Chris Hillman and Roger McGuinn about their reasons for celebrating The Byrds’ Sweetheart Of The Rodeo album. New recruit Erin Osmon meets rising star Jess Williamson at home in Los Feliz. Rob Hughes rounds up Julian Cope, Pete Wylie and other faces from Liverpool’s fabled post-punk scene to map the journey taken from Eric’s to Top Of The Pops.

We also have new interviews with Gruff Rhys, White Denim, Beth Orton and Dave Davies (who has the latest updates on all things Kinks). There’s new albums by Elephant Micah, Oh Sees, Amanda Shires, Kathryn Joseph, Odetta Hartman, Mark Lanegan and Duke Garwood, Cowboy Junkies, Daniel Bachman and Tomberlin – all of whom you can also hear on our free 15-track CD. In our Archive section, we revisit classics by the Pretty Things, David Axelrod and The Fiery Furnaces. There’s a lot in here, I hope you’ll agree.

You can also read the Making Of… Sly & The Family Stone’s “Dance To The Music”. Recalling the times and the circumstances under which the band formed, drummer Greg Errico says, “There were riots and all that stuff going on, and here we were, mixed genre, black and white, breaking all the rules. It was a challenge, but we didn’t fell it.

“We had the music and we had each other.”