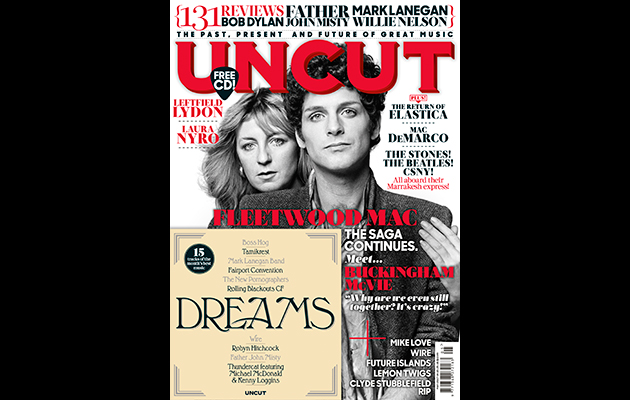 That time again, folks, as we proudly unveil a new issue of Uncut. This one is out on Thursday in the UK (though subscribers should be receiving it any moment now) and, as you can see, our cover stars are Lindsey Buckingham and Christine McVie, giving us an exclusive look at the next phase of that epically complex Fleetwood Mac saga… “It’s that umbilical cord that can’t be broken,” says McVie. “It just pulls you back.”

Then there’s Elastica, interviewed in depth for the first time in many years, as their debut album returns on vinyl. I’m not really a big fan of Britpop nostalgia; truth be told, I wasn’t keen on many of those bands and records when they first came out, 20 or 25 years ago. It’d be disingenuous to pretend I can’t be sentimental about some of the culture that surrounded me in my earlyish twenties, but as a general rule I cling closest to the music I love, whether it was made yesterday or before I was born. Not much Britpop makes the cut.

There are, of course, exceptions, and the appearance of Elastica in this month’s issue is a cause for some personal reflection and pleasure – validated by the fact that their records still sound pretty cool today. I was the first person to actually write about Elastica, I think – or more accurately, the first journalist to be allowed to write about them. Everyone on the London music scene had heard about their potential by summer 1993, but I was chosen to accompany them to a covert show in Aldershot, of all places. The night was a good one: they played a brisk and exciting set of upgraded singalong post-punk; Damon Albarn turned up and threw an empty pint glass (plastic, as I recall) at the headliners, Kinky Machine; I wrote an obnoxiously hyperbolic review for NME that I’m too embarrassed to quote from here.

Soon enough, Elastica’s story became a messy parable of Britpop excess, but Michael Bonner’s terrific new interview – including the rarely-spotted lynchpin, Justine Frischmann – recaptures the spirit and possibilities of a band at the start of an adventure. “I was disappointed with the women in bands that were popular at the time,” Frischmann tells him. “It felt like there was no one who represented me and my friends, the humour, the feel of the time and place we were living in. Quirky and English, smart and funny and angular. It really felt like a gang.”

What else? A CD that features Robert Plant & Fairport Convention, Father John Misty, Mark Lanegan, The New Pornographers, Robyn Hitchcock, a couple of big personal favourites (Feral Ohms and Jake Xerxes Fussell) and, amazingly, Kenny Loggins and Michael McDonald, who both guest on Thundercat’s smooth “Show You The Way”. Laura Snapes on Laura Nyro. Midlake’s new supergroup, BNQT. At least some of The Black Crowes reborn as The Magpie Salute. Bob Dylan, Willie Nelson, Cosey Fanny Tutti, Angaleena Presley, Rod Stewart, T.Rex and Klaus Dinger in reviews. And another one of Peter Watts’ vivid explorations of the counterculture, as he uncovers the hippy generation’s infatuation with Morocco. “It’s strong stuff,” he learns. “The sights are strong, the music is strong, the drugs are strong and the lifestyle is strong.”