Introducing the new issue of Uncut! 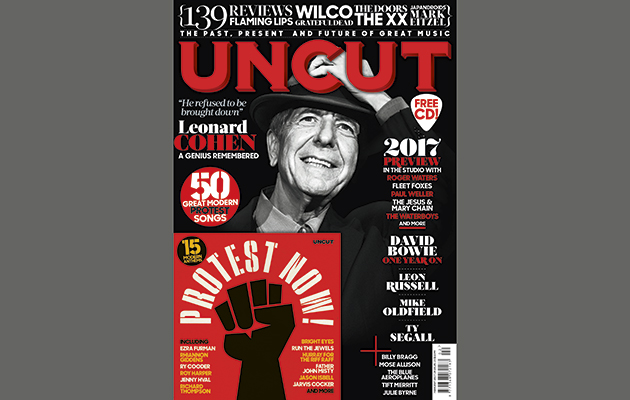 A little good news today, you’ll be relieved to hear: the new issue of Uncut should have materialised in UK shops this morning. Our cover star, of course, is Leonard Cohen, and we celebrate his genius with a deep piece by David Cavanagh, plus intimate memories from his closest collaborators, including John Lissauer, Sharon Robinson, Patrick Leonard and Roscoe Beck.

It is Beck who tells us one of the most remarkable stories, remembering a day in Ghent, in 2012, when he got a serious bout of food poisoning and passed out. “When I awoke,” says Beck, “there was Leonard, crouching at the foot of my bed, and looking directly into my face with intense concentration mixed with the utmost of compassion. I didn’t know how long I had been there, or how long he had, but I had the feeling that he had been watching over me the entire time I was out. Opening my eyes and seeing his eyes so intently looking into mine is an experience I will never forget. Management was already talking about cancelling the show and everyone was in panic mode, that is, everyone but Leonard. He spoke to me lightly, ‘Hey Rossie…’ The moment was so emotionally poignant that I could only laugh, and then I said, ‘I’ll be there, Leonard.’  ‘I never doubted it,’ he said.”

Elsewhere in the issue, we’ve got a great lost interview with another of 2016’s fallen heroes, Leon Russell, and a behind-the-scenes look at both the upcoming David Bowie tribute shows, and the BBC’s new Bowie documentary. Mike Oldfield, Ty Segall and Billy Bragg are interviewed, and there’s a mammoth 2017 preview, with all the latest news on forthcoming albums by Roger Waters, Fleet Foxes, Paul Weller, Ray Davies, The Jesus & Mary Chain and many more.

Plus, there’s a timely rundown of 50 great protest songs from the past decade, with 15 of them – including tracks by Ezra Furman, Rhiannon Giddens, Ry Cooder, Run The Jewels, Father John Misty, Jason Isbell, Jarvis Cocker – compiled on our free CD. From Bob Dylan to Beyoncé, via a litany of old Uncut favourites and neglected new voices, it proves that politically-charged music is as vital as it’s ever been, even if it’s not always acknowledged as such. In our list, you’ll find a song about the financial crisis by a personal friend of Donald Trump, and another that actually brought down a government.

For all the necessary righteous fury, writing a good protest anthem can be a delicate business: how to articulate the visceral horrors of the world when so much of a songwriter’s energy is traditionally focused on the most personal and internal of dramas? Trust Leonard Cohen to think long and hard about the dilemma, as one suspects he did about most things.

When he addressed global iniquities on Popular Problems in 2014, though, he had evidently decided self-reflexive irony might be his best mode of attack. “There’s torture and there’s killing, and there’s all my bad reviews,” he noted, unflinchingly. “The war, the children missing… Lord, it’s almost like the blues.”

That song, “Almost Like The Blues”, makes the cut in our rundown of the 50 best protest songs of the past decade. One more significant entry in the Top 50 (and a highlight of the free accompanying CD) is an old Hurray For The Riff Raff song, “The Body Electric”. Their forthcoming album, The Navigator, is also discussed in our 2017 preview – a superb album and a critically important one in 2017: “An empowering battle cry for the people who are being pushed out,” as the band’s Alynda Lee Segarra tells us.

“A lot of the songs I wrote at the time seemed dystopian ideas,” she continues. “‘What’s the worst that could happen?’ Now it’s pretty much the worst you’ve ever seen – so it feels very timely to put out.”

To borrow a title from another song in our Top 50, I guess this is why we fight.