After Lou Reed died on October 27 last year we began discussing how best we could commemorate the man and his tremendous body of work. The natural solution presented itself in the form of an Ultimate Music Guide. 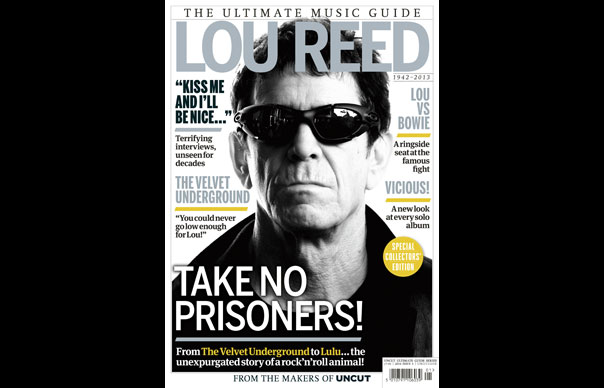 After Lou Reed died on October 27 last year we began discussing how best we could commemorate the man and his tremendous body of work. The natural solution presented itself in the form of an Ultimate Music Guide.

Accordingly, the latest instalment in our series of Ultimate Music Guides – which goes on sale this Thursday [January 16] – gathers together a wealth of interviews with Reed from the archives of Melody Maker, NME and Uncut, as well as brand new, in depth reviews of all Reed’s albums – from The Velvet Underground & Nico up to his final studio album, Lulu, his collaboration with Metallica.

In our earliest interview – from 1972 – Richard Williams finds Reed hard at work on his solo debut in – of all places – Willesden. After that, you’ll find some hilarious and often revealing encounters with Reed. Regular readers of Uncut will enjoy re-reading Allan’s various adventures with Lou down the years – scraps with Bowie included. But there’s also some great vintage pieces from the likes of Charles Shaar Murray, Michael Watts and Chris Charlesworth and later interviews with Nick Johnstone and Gavin Martin taken from Uncut’s own archives.

Just as importantly, the album reviews present a fresh overview to Reed’s tremendous body of work. While it’s great to be reacquainted with the more familiar albums like the Velvets records or Berlin or New York, the work done by our writers in reassessing Reed’s back catalogue truffles out significant treasures in even his most overlooked or neglected records. Case in point: I had forgotten how good Hudson River Wind Meditations was. There’s also a round up of Reed’s compilations, live albums and miscellany – singles, collectables and guest appearances.

Anyway, Lou Reed: The Ultimate Music Guide is in shops and on digital newsstands from Thursday, and to whet your appetite here’s a couple of classic Lou clips for you.

Incidentally, here’s some links for you to buy this online or digitally.

“Romeo Had Juliette” from The United States Of Poetry, 1996