Introducing The History Of Rock 1986 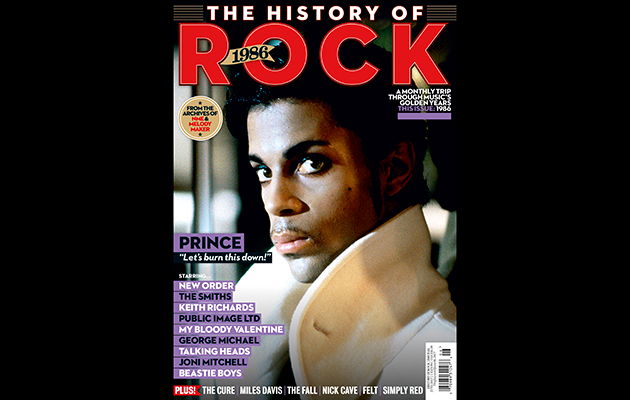 Welcome to 1986! Our latest edition of History Of Rock will manifest in UK stores around Thursday, but you can buy a copy now from our online store (as well as all the previous volumes of The History Of Rock). Prince is our cover star this time out, and here’s John Robinson, as usual, to do the introductory honours…

“Thanks to NME’s C86 cassette, a collection of young and promising guitar bands, this is an unusual year, in that it seems to come with its own soundtrack album already attached.

“In fact, though the music press of that year covers this emerging wave of groups like Primal Scream, some of the most dramatic events of 1986 take place in front of larger audiences, and far closer to the mainstream. From their yobbish first appearances in public, The Beastie Boys quickly prove that their records are serious – and particularly serious about a good time. Mancunians Simply Red and The Smiths both develop wider congregations of ecstatic supporters.

“Our cover star Prince, meanwhile, seems to dominate many people’s thinking. He’s made another excellent album, and another film. He’s working with Miles Davis, and has become a topic of conversation. When in August he plays a run of shows at London’s Wembley Arena, it leaves critics, if not exactly speechless, then at least convinced that these represent an apogee of what might be possible in a rock concert.

“It’s true, he’s not one for saying much. But in his stead, strong musical opinion flourishes from other sources. This year, The Go-Betweens, Nick Cave, The Fall, and the Smiths all make landmark work – and don’t just walk it, but talk it powerfully, too. Ten years on from punk, John Lydon has plenty to say about it, and his great new record. In the world of pop, meanwhile, George Michael and the Pet Shop Boys prove that thoughtful comment and a sense of mission aren’t the preserve of groups with guitars.

“This is the world of The History Of Rock, a monthly magazine which follows each turn of the rock revolution. Whether in sleazy dive or huge arena, passionate and stylish contemporary reporters were there to chronicle events. This publication reaps the benefits of their understanding for the reader decades later, one year at a time. Missed one? You can find out how to rectify that by clicking here.

“In the pages of this 21st edition, dedicated to 1986, you will find verbatim articles from frontline staffers, filed from the thick of the action, wherever that may be.

“At the Hacienda, jousting ego with New Order’s Peter Hook. Being told by Nick Cave that you, and every member of your profession, are scum. At the Brixton Academy, as Morrissey raises a sign to express all that the band’s wry and empathetic music have come to mean in the last three years.