Introducing… The History Of Rock 1985 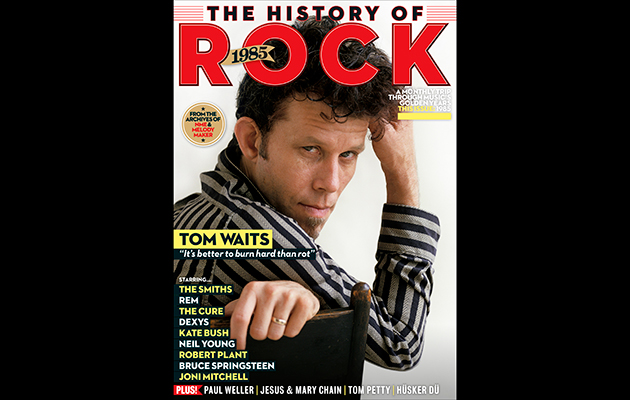 1985: a year of The Smiths and REM, Kate Bush and the Jesus & Mary Chain, of Dexys’ Don’t Stand Me Down and the small matter of Live Aid. This week, we’re proud to present our new edition of The History Of Rock, dedicated to 1985: it’s on sale in the UK on Thursday, but you can visit our History Of Rock online shop to order a copy of 1985 – and, indeed, all the preceding volumes.

Here, anyhow, is John Robinson to reveal the details of this excellent volume. Tom Waits, as you’ll see, is our cover star…

“Tom Petty releases a song called ‘Spike’ in 1985, and in it he makes an observation that holds up pretty well for the entire year: ‘The future ain’t what it used to be.’ As ever with Petty, it’s a smart remark you can take a couple of ways, but whichever way you choose to take it, it tells you something about change He might mean to convey a disappointment with the world’s prospects. He might simply be expressing a rejection of glossy modernity in music, and advocating a more traditional mode.

“1985 has supporters of both these positions. Enduring performers like Neil Young, Joni Mitchell, Robert Plant and Tom Waits display the same restless creativity deep into their careers as they did at the start – they’re the same, but always different.

“Younger blood is also much in evidence. Husker Du, The Jesus and Mary Chain, Run DMC, The Pogues, The Cure and The Cult are among those moving the musical agenda on. So determined is Kevin Rowland from Dexys to move things on, he runs the risk of leaving his fans and the record business behind.

“Then there are those who see their work as a shoulder to a larger wheel. Billy Bragg is working with the British Labour Party. Paul Weller remains alert and engaged. Then, when Bob Geldof announces Live Aid in June, the July event motivates the rock world to stir itself across its genres and generations to help alleviate the suffering caused by the Ethiopian famine.

“This is the world of The History Of Rock, a monthly magazine which follows each turn of the rock revolution. Whether in sleazy dive or huge arena, passionate and stylish contemporary reporters were there to chronicle events. This publication reaps the benefits of their understanding for the reader decades later, one year at a time.  Missed one? You can order them all here.

“In the pages of this 21st edition, dedicated to 1985, you will find verbatim articles from frontline staffers, filed from the thick of the action, wherever it may be. On the bus with Neil Young, learning about David Crosby’s drug problems. Hearing how Mick Jagger fished a paparazzo out from under a hedge, and gave him a cup of tea. At an art gallery with Joni Mitchell, hearing how life has treated Jack Nicholson.

“’It’s been pretty fucking good,’ Jack says. It’s the kind of year to make you look back and agree.”