Introducing… The History Of Rock 1984! 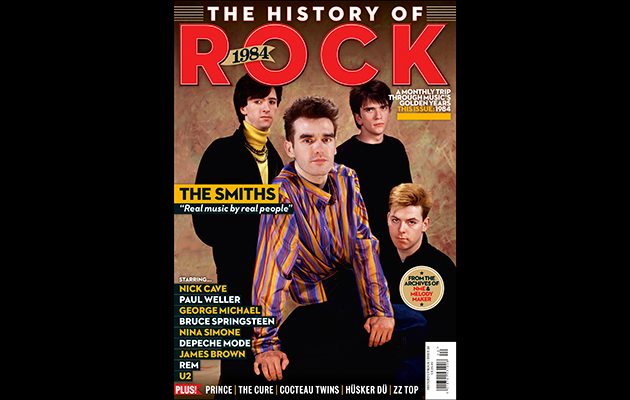 “Real music by real people”: that’s the quote on the cover of the new edition of The History Of Rock, positioned artfully next to a picture of The Smiths. Our encyclopaedic monthly mag has reached its 20th issue, and the year under the microscope is 1984. It should be arriving in the shops on Thursday, but you can order a copy of History Of Rock 1984 from our online shop now. Please remember, too, that if you’ve missed any previous issues the full History Of Rock range is now in stock there.

Lots to enjoy this issue: Nina Simone and Hüsker Dü; James Brown and ZZ Top; Wham! Making mincemeat of a Melody Maker journalist. Here, anyway, is John Robinson to roll out the big welcome to The History Of Rock 1984…

“The 20 years so far covered by History Of Rock have seen action and reaction, financial successes and grassroots revolution. This year, rock remains as engaged as it needs to be during the administration of Margaret Thatcher – with its cold war, nuclear threat and high unemployment – the movement which takes place this year is actually not aggressive in character.

“More than ever, artists put their money where their mouth is to change the world for the better. In September, Paul Weller – continuing a recent philanthropic streak – and Wham! play a benefit concert for striking miners, while at the end of the year the pair join Band Aid. A collective put together by Bob Geldof and Midge Ure after viewing a news report on the Ethiopian famine, their ad hoc group of pop stars ends the year at the top of the charts, raising millions for charity.

“Musically, meanwhile, the aggressive commerciality signalled by the rise of Duran Duran now meets its characterful reaction. The likes of REM, Lloyd Cole, Prefab Sprout and our cover stars The Smiths celebrate a renewal of guitar music. Under the radar, meanwhile, a kinship develops between Black Flag, Nick Cave and The Fall – whose work is seen as much as transgressive writing as it is music. In the US, Prince and Michael Jackson engage with huge audiences in different, but no less dramatic ways.

“This is the world of The History Of Rock, a monthly magazine which follows each turn of the rock revolution. Whether in sleazy dive or huge arena, passionate and increasingly stylish contemporary reporters were there to chronicle events. This publication reaps the benefits of their understanding for the reader decades later, one year at a time.  Missed one? You can find out how to rectify that here.

“In the pages of this twentieth edition, dedicated to 1984, you will find verbatim articles from frontline staffers, filed from the thick of the action, wherever it may be. In a hotel room with Morrissey. Hearing Dave Lee Roth explain why Van Halen is like a tampon. And finding out that the way to George Michael’s heart is through an aggressive interview.

“’We didn’t want to talk to Melody Maker because your hypocrisy makes us sick,’ says George. ‘You use our name on the cover and then slag us off inside. We’re only talking to you because we fancied doing a juicy interview for a change…’”