Introducing The History Of Rock 1983 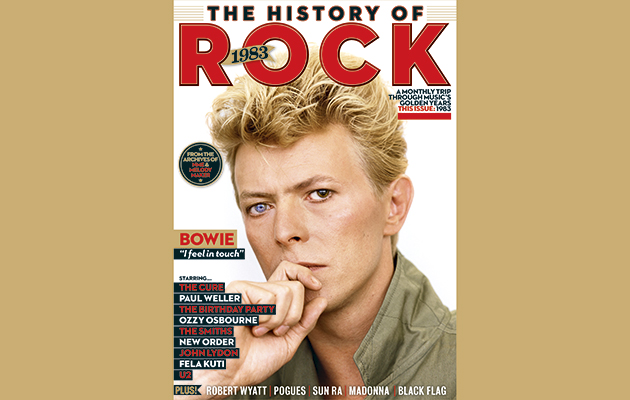 Happy new year, everyone: we trust our Albums Of 2016 and Reissues Of 2016 might have come in useful over the seasonal period. Our latest edition of Uncut sneaked out just before Christmas, and is still around, featuring as it does a magisterial Leonard Cohen tribute, a survey of 50 great modern protest songs (plus accompanying free CD), lots of Bowie anniversary activity, a lost Leon Russell interview, Mike Oldfield, Ty Segall and an invaluable guide to 2017’s key releases.

To accompany that, we have the latest volume of The History Of Rock dropping into UK shops this Thursday (though you should be able to order it from our online shop). The year this issue deals with is 1983, hence the pensive appearance of “Let’s Dance”-era Bowie on the cover. The Cure, Paul Weller, The Birthday Party, Ozzy Osbourne, The Smiths, New Order, John Lydon, Fela Kuti, U2, Robert Wyatt, The Pogues, Sun Ra, Black Flag and Madonna also figure in the usual packed, eclectic mix. Here, as usual, is John Robinson to do the formal introductions…

“Welcome to 1983. David Bowie has decided to stop experimenting. After a dozen years of unpredictable musical strategy, his every move giving rise to – as he has himself put it – ‘whole schools of pretension’, he has returned, effectively, to earth. Perhaps even gone back in time a little.

“That’s the impression this month’s cover star gives when he convenes a press conference to announce his forthcoming live dates. Fatherhood, listening to jazz, new experiences in Australia… It’s all left him with an urge to have his music connect with people in a less intellectual fashion, to speak more from the heart. His new music now nods to soul and R&B.

“It’s a noble plan, and one in which Bowie, even if he is ahead of the curve, is not alone. This year, the likes of Paul Weller, U2, Black Flag, Fela Kuti, REM and The Smiths – strange bedfellows otherwise – are all united by a sense of mission, even manifesto in their music. Or as Henry Rollins from Black Flag puts it: ‘Putting your ass on the line for a bunch of people you don’t even know.’

“Their talk is of revelation, personal truth and winning converts, and both Bowie and the enduring Curtis Mayfield, a star for the past 25 years, imply how it all might be achieved with a certain grace. Not that life skating on the surface is all bad. In their different ways, New Order, Duran Duran, Eurythmics and Frankie Goes To Hollywood all show how it might be done while having fun.

“This is the world of The History Of Rock, a monthly magazine which follows each turn of the rock revolution. Whether in sleazy dive or huge arena, passionate and increasingly stylish contemporary reporters were there to chronicle events. This publication reaps the benefits of their understanding for the reader decades later, one year at a time.  Missed one? You can find out how to rectify that from our online shop. In the pages of this 18th edition, dedicated to 1983, you will find verbatim articles from frontline staffers, filed from the thick of the action, wherever that may be.

“Perhaps Nick Cave’s sick bed on a sofa in the TV room. It might mean talking gangs with Afrika Bambaata or drink with Shane MacGowan. Even sharing a stately, old- world joke with David Bowie.