Introducing The History Of Rock 1982 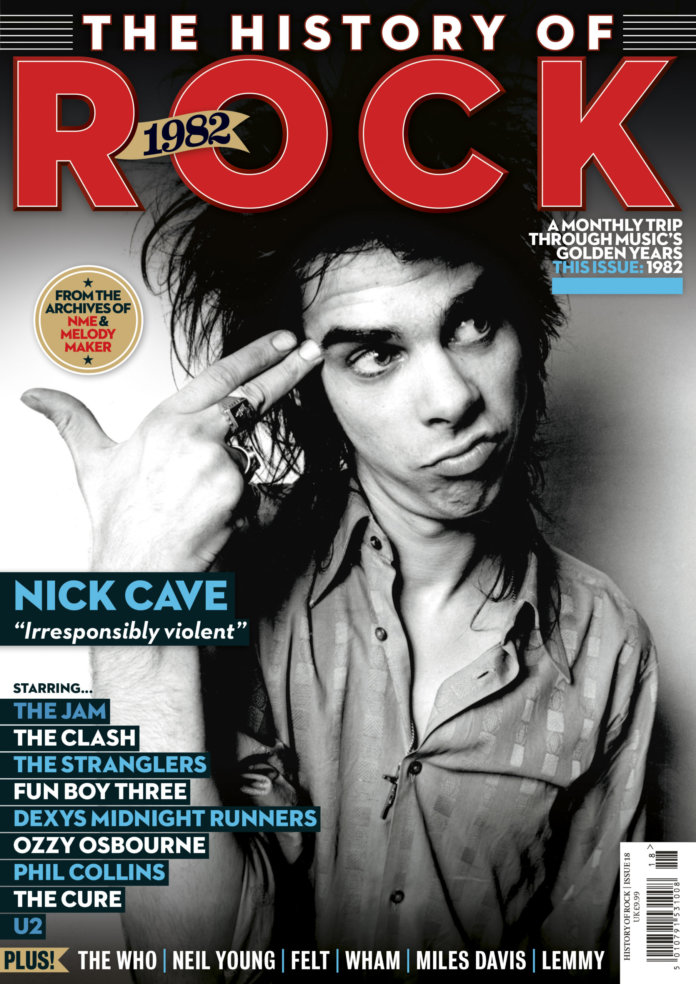 Hi, this week’s offering from the Uncut publishing empire is a brand new edition of our History Of Rock series; it’s on sale in the UK on Thursday, but you can order a copy now from our online store. This month, the cover star is a compellingly frazzled Nick Cave, at large with The Birthday Party at a time when the somewhat glossier ranks of New Pop are on the march. An exciting and frictional time for music, which John Robinson is here to introduce below. Before he does, though, a reminder that you can find a wealth of previous History Of Rock volumes in our online shop, stretching back to the 1965 edition. 1968 is the latest one back in stock, if you’re missing that one from your collection.

“Welcome to 1982. ‘It’s all got so serious, hasn’t it?’ says Lemmy, speaking about his interviewer’s employer, the New Musical Express, but also incidentally about the world in general. ‘If I wanted to read about unemployment, I’d buy The Times.’

“The Motorhead frontman is right and he’s wrong. Things have certainly got serious. In addition to the suspicion there will be an imminent nuclear attack, British Prime Minister Margaret Thatcher now offers the young people of the UK some more concrete worries: high unemployment and a war in the south Atlantic.

“Duly some of the music of 1982 is serious too. Records by the Clash and Robert Wyatt address specifically the violent dramas unfolding at home and on the global stage. The explosive music made by our cover star Nick Cave, and his group the Birthday Party, meanwhile, offers a dramatic and cathartic release to the dissatisfaction of the time.

“Perversely, it is also a time for a flowering of glossy New Pop, which seems actively to represent the Conservative Party’s policy of putting yourself first. Duran Duran are in their imperial phase. On a happier note, The Jam, a vibrant force since punk, decide – at the peak of their powers – to quit before they become as complacent.

“This is the world of The History Of Rock, a monthly magazine which follows each turn of the rock revolution. Whether in sleazy dive or huge arena, passionate and increasingly stylish contemporary reporters were there to chronicle events. This publication reaps the benefits of their understanding for the reader decades later, one year at a time.  Missed one? You can find back issues in our online shop.

“In the pages of this 17th edition, dedicated to 1982, you will find verbatim articles from frontline staffers, filed from the thick of the action, wherever it may be.

“That might mean talking with Paul Weller about how not to become ‘a despicable arsehole’. Having a cup of tea with Van Morrison with Kevin Rowland. Even discussing drugs, (and The Slits) with William S Burroughs and Brion Gysin.

“Perhaps, in such stimulating company, there’s reason to be optimistic. Even an old hand can’t fail to look on the bright side.

“’You could shake things up,’ Lemmy tells NME’s Gavin Martin. ‘You look like a fun-loving lad…’”