Deluxe, expanded: the most up-to-date work on Bowie’s career 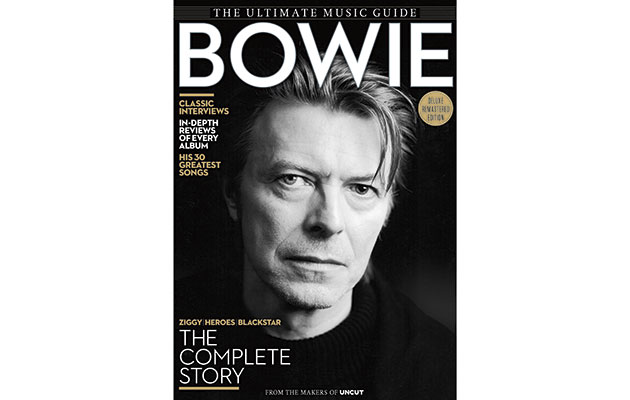 Last summer, Tony Visconti shared his earliest memories of David Bowie with Uncut. They met in 1967, when Bowie, as an ambitious 19 year old, had already experienced a number of false starts in his career. “He had some experience in the studio and he was definitely a budding songwriter,” recalled Visconti. “I was introduced to him via his very first album on Deram, the one where he was all over the shop – no two songs are in the same genre. But he was on the fence then. Later on I asked him, ‘What would you do if you weren’t a rock star?’ He said, ‘I would have worked in musical theatre.’”

Bowie would have to wait 50 years until he finally got his wish to mount a musical. As it transpires, it was also the final work he completed before his death on January 10, 2016: Lazarus. Watching Lazarus in London less than a year after Bowie’s passing was a strange experience. As with the ★ album, it was hard to come to it without looking round for clues about Bowie’s own condition. “I’m a dying man who can’t die,” claimed Bowie’s protagonist/alter ego, Thomas Jerome Newton, and lines like that now seem freighted with Bowie’s own views on both his physical state and his artistic legacy.

We celebrate the full-span of Bowie’s career – from his self-titled debut to ★ and Lazarus – in The Ultimate Music Guide: David Bowie. The latest in our long line of upgraded and expanded deluxe titles, its 148 pages include in-depth reviews of every album and revealing archive interviews making it the most up-to-date work on Bowie’s career. Among the additional features in this edition, you’ll find our survey of Bowie’s 30 greatest songs, as chosen by colleagues and contemporaries including Visconti, Jimmy Page, Woody Woodmansey, Siouxsie Sioux, Morrissey, Dave Gahan and James Murphy.

It’s in shops on Thursday – but available now in our online shop – and it showcases an artist whose incomparable vision, and a determination to pursue it at any cost, has been in place from the very beginning. Another of the Guide’s new features is a comprehensive look back at Bowie’s 1960s, where his old friend George Underwood observes: “David was planning his career in his head before it happened… He said to me once, ‘I’m in this up to my neck.’” As if to underscore this point more publicly, Bowie told Melody Maker in 1972, “I’m going to be huge, and it’s quite frightening.” He was right, of course. This, then, is the story of how it happened.