Inside our new free CD, Sounds Of The New West Presents… Ambient Americana

A cosmic pastoral treat with the new issue of Uncut 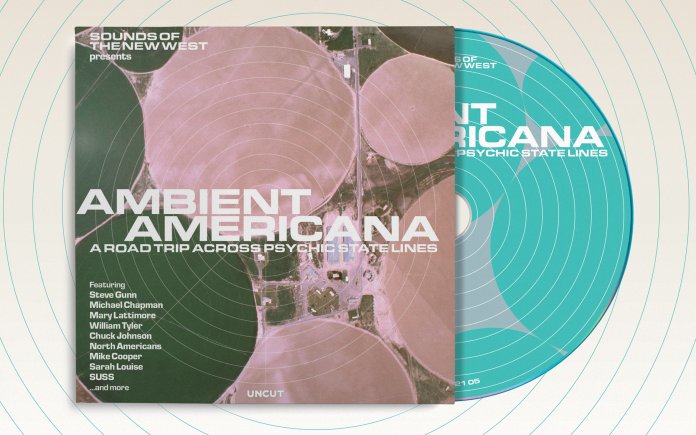 The new issue of Uncut, dated May 2021, and available now, comes with a special free CD – the latest in our Sounds Of The New West series, Ambient Americana.

It compiles 15 tracks by artists mixing the traditions of country and folk with the mind-expanding sounds of ambient and kosmische music – from the blown-out songforms of Steve Gunn and Sarah Louise to the pedal-steel transcendence of Chuck Johnson, SUSS and Luke Schneider, via the droning majesty of William Tyler, North Americans, Mary Lattimore and others.

The issue also includes a full feature looking at this growing tide of musicians, with contributions from many of those on our CD.

Here, then, is our guide to the compilation:

1 SUSS
Drift
Our roadtrip through the cosmic pastoral landscape begins with this nocturnal tune from the New York band SUSS, who evoke an empty desert on “Drift”, from last year’s album Promise. Pat Irwin’s soaring guitar parts mingle with what sounds like cicadas in the brush.

2 STEVE GUNN
Way Out Weather
Steve Gunn may be better known for his folk- and rock-oriented albums than for his forays into ambient music, but the title track to his 2014 album is all vibe, with smears of pedal-steel morphing into a crisply picked guitar theme.

3 WILLIAM TYLER
Four Corners
William Tyler’s 2020 EP “New Vanitas” gravitates toward the spacey, especially on its fourth track ,“Four Corners”. Inspired by the spot in the southwestern United States where the borders of four states, Colorado, Utah, Arizona and New Mexico, come together, it uses a gently burbling beat to anchor a free-floating guitar riff to Earth.

4 MARY LATTIMORE
Sometimes He’s In My Dreams
Los Angeles-based solo harpist Mary Lattimore travelled halfway around the world to record her excellent 2020 album Silver Ladders in Cornwall, with Slowdive’s Neil Halstead producing. Her plucked notes on this standout song sound like stars forming a constellation of a melody.

5 NORTH AMERICANS
American Dipper
Formerly a solo project for guitarist Patrick McDermott, North Americans became a duo with the addition of pedal-steel player Barry Walker Jr. Their chemistry is apparent on this loping trail song from 2020’s Roped In.

6 ANDREW TUTTLE
Hilliard Creek, Finucane Road
The Australian guitarist based the songs on his recent album Alexandra on his suburban hometown, which is changing with intensified exurban sprawl. Chuck Johnson joins him on this song, adding pedal-steel to his banjo.

9 LUKE SCHNEIDER
Exspirio
Luke Schneider was determined to record his entire solo debut on his trusty pedal-steel guitar. Inventive and innovative, Altar Of Harmony finds beauty in the crackle and queasy sustain of his strange notes.

10 BARRY WALKER JR
Shoulda Zenith
When he’s not collaborating with Patrick McDermott in North Americans, Walker Jr records
his own albums as a solo artist. The title track to 2019’s Shoulda Zenith is a quirky lo-fi jam that gradually builds in intensity – it’s like the third hour of some lost Grateful Dead bootleg.

12 MIKE COOPER
Paumalu
Rayon Hula, an instrumental album inspired by the islands of the South Pacific, is one of many adventurous records produced by the eccentric guitarist since he fully embraced ambient experimentation in the late ’90s. “Paumalu” features his lap-steel improvisations over a laconic, dream-like rhythm.

13 SARAH LOUISE
Your Dreams
Sarah Louise Henson offers a different take on cosmic pastoral, one that sounds more hallucinatory than spacey. “Your Dreams”, from her new album Earth Bow, changes shape constantly, layering clattering drums over mushroom synths over her own fractalising vocals.

14 DEAN McPHEE
The Alder Tree
Inspired by his fascination with English folklore and mysticism, the fourth album by Yorkshire guitarist McPhee is a showcase for his inventive Telecaster playing. He’s a one-man band on “The Alder Tree”, answering his own deep reverberating notes with sharp raga discursions.

15 CHUCK JOHNSON
Constellation
Johnson developed his unique style as a composer/guitarist in the DIY art spaces in and around Oakland, California. His new LP, The Cinder Grove, recreates the acoustics of those rooms as foundations for his ambient pedal-steel arrangements, which balance grief and hope.

This issue of Uncut is available to buy by clicking here – with FREE delivery to the UK and reduced delivery charges for the rest of the world.