Iggy Pop, Grace Jones and Henry Rollins to star in “the loudest silent movie on Earth” 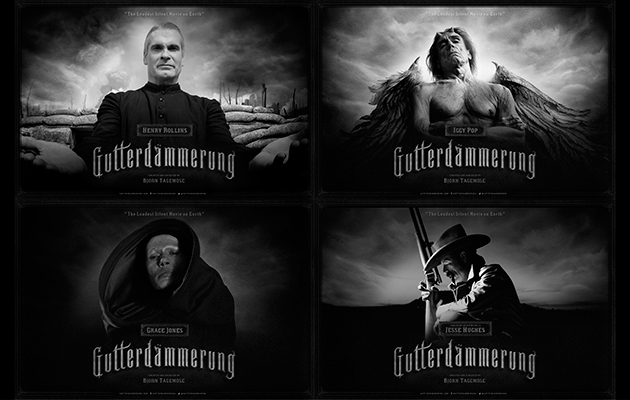 Iggy Pop, Grace Jones and Henry Rollins are to star in a new film project, Gutterdämmerung.

Billed as “the loudest silent movie on Earth”, the film will be directed by Belgian-Swedish filmmaker, Bjorn Tagemose.

Pop will play a “punk-angel” called Vicious, Rollins will play “an evil puritan priest” while Grace Jones “plays the only person that can control all of the testosterone of all rock and roll bastards in this loud film.”

A synopsis of the plot reveals these remarkable details:

“The film is sent in a world where God has saved the world from sin by taking from mankind the Devil’s ‘Grail of Sin’…..the Evil Guitar. The Earth has now turned into a puritan world where there is no room for sex, drugs or rock ‘n’ roll.

“From up on high in heaven a “punk-angel”, Vicious (portrayed by Iggy Pop), looks upon the world with weary bored eyes. Behind God’s back, Vicious sends the Devil’s guitar back to earth and sin in all its forms returns to mankind.

“An evil puritan priest (Henry Rollins) manipulates a naive girl to retrieve the guitar and destroy it. On her quest to find the Devil’s Grail Of Sin, the girl is forced to face the world’s most evil rock and roll bastards. Throughout her journey, she has a rival in the form of a rock chick determined to stop her from destroying the instrument.”