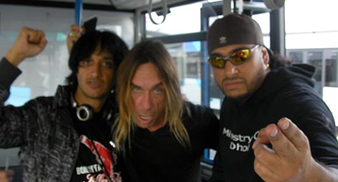 Asian Dub Foundation have collaborated with legendary punk rocker Iggy Pop on a cover of The Stooges famous track “No Fun”.

The recorded track, which features on ADF’s forthcoming studio album ‘Punkara’, came about after the band met Iggy Pop at a festival, when the veteran proclaimed them the “best live band he’d seen in 30 years.”

ADF’s Chandrasonic describes their cover version of “No Fun” as “unbridled, off the hook banghra meets unbridled off the hook thrash proto-punk. The two aren’t combined very often but they have a lot in common.”

The album, released on October 6, also features a collaboration with Gorgol Bordello’s Eugene Holtz on a new version of their track “S.O.C.A.”

Asian Dub Foundation are currently touring Europe and a London show is to be announced soon.

More information about Punkara and live dates available from: www.asiandubfoundation.com