And they'll be playing the new material live too 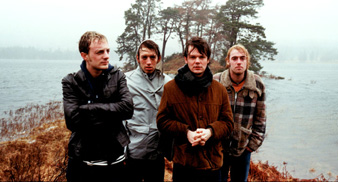 Ediburgh rock group, Idlewild have announced that their new album “Make Another World” will be released on March 5 and it will be preceeded by a new single, ‘No Emotion’ next month.

‘Make Another World’ is the follow-up to 2005’s ‘Warning/Promises’ album, which spawned three UK Top 40 singles, including ‘Love Steals Us From Loneliness.’

Idlewild have gone to back to their earlier rockier sound working with producer Dave Eringa (Manics, Kubichek) for their sixth and latest album. Eringa worked with Idlewild on earlier albums, ‘100 Broken Windows’ in 2000 and ‘The Remote Part’ in 2002.

The promo video for ‘No Emotion’ has just been completed – and see’s the five piece Scootish band fronted by Roddy Woomble all dress up as South Park character Kenny, and run around the streets of Glasgow with a paper mache goat!

You can catch Idlewild at the following 11-dates in March: