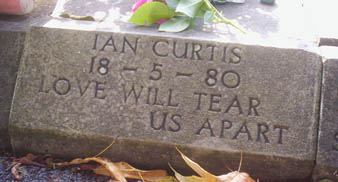 A memorial stone for Ian Curtis has been stolen from his hometown of Macclesfield.

The shrine to the Joy Division star, who died in 1980, is visited by thousands of fans every year.

Detectives said the stone was taken sometime between Tuesday afternoon and Wednesday morning, and are appealing for witnesses.

A police spokesman said: “There is no CCTV in the area and there are no apparent leads as to who is responsible for the theft.

“This is a very unusual theft and I am confident that someone locally will have knowledge about who is responsible or where the memorial stone is at present.”

Control, the Ian Curtis biopic released in 2007, and the documentary film Joy Division show the continued interest in the cult figure.

Curtis was 23 when he hanged himself in the kitchen of his Macclesfield home in May 1980, shortly before the band were due to go on tour in the US.