New film from Shaun of the Dead makers is here 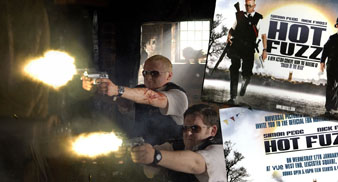 Last night (January 18) UNCUT attended the first screening of Hot Fuzz, the new comedy from the creators of Shaun Of The Dead.

The film stars Simon Pegg as Nicholas Angel, a London police officer who’s formidable arrest record drives his superiors to “promote” him to the sleepy hamlet of Sanford, for fear that he’ll make the rest of the Met look inept.

In the next issue of UNCUT (on sale January 31), Pegg describes Hot Fuzz as “Midsomer Murders directed by Tony Scott”, a brilliant concept that the film occasionally struggles to deliver successfully.

Although the initial conflict between go-getting Angel and his laid back, country colleagues works well, the film’s slip into Wicker Man/Straw Dogs pastiche is uninspiring and, for anyone who’s seen The League Of Gentlemen, way over familiar. The final, 20-minute shoot-out, an inspired take on the fast-cut, blow-shit-up of a Jerry Bruckheimer movie, is brilliantly observed. But as a director Wright isn’t quite experienced enough to pull it off.

We hate to niggle, but the stream of Britcom cameos – Steve Coogan, Martin Freeman, Bill Nighy, Stephen Merchant, Bill Bailey, David Threlfall, Adam Buxton – while very impressive, becomes something of a distraction after a while.

On a more positive note, the core cast around Pegg is especially solid – Paddy Considine, Big Train’s Kevin Eldon, Peep Show’s Olivia Coleman, Broadbent and Frost as Angel’s fellow officers; Timothy Dalton as the baddie. For anyone who’s seen Dead Man’s Shoes, there’s something strangely enjoyable about watching Considine running in slow-motion down a supermarket isle with a pump-action shotgun blowing seven shades out of the delicatessen counter.
UNCUT’s verdict? Certainly not as quirky and outright funny as Shaun Of The Dead, but it’s going to be one of the biggest hits of the year.

You can get caught by the fuzz by clicking here now