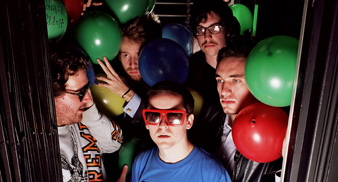 Hot Chip have announced that are to play a one-off show at London’s Electric Ballroom on November 22,

The electro band have also revealed more about what’s on their new studio album ‘Made In The Dark‘ – the follow up to last year’s Mercury Music Prize nominated ‘The Warning’.

The album which is not due for release until February 4, is the product of two years of touring, followed by six months in their studio. Hot Chip have transfered many of the songs they’ve created on the road to the record.

Some of the titles of the new 13 track album have been revealed to be;
‘Shake A Fist’, ‘Bendable Poseable’, ‘We’re Looking For A Lot Of Love’, title-track ‘Made In The Dark’, ‘In The Privacy Of Our Love’, ‘Ready For The Floor’ and ‘One Pure Thought’.

‘Shake A Fist’ is a track that has already been circulating at clubs – featuring elecrtro wizard Todd Rundgren sampling – the track has caused a buzz since it came out on limited edition etched 12” earlier this year.