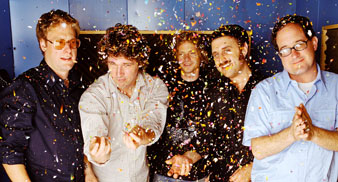 Uncut’s favourite new American band are to release a new single “Stuck Between Stations” on May 7.

Taken from their Uncut five-star rated album “Boys And Girls In America,” the single will be released in two limited edition 7″ formats.

The first 7″ has a new track on the B-side “Teenage Liberation” and is limited to a 1500 run, 500 of which are printed on coloured vinyl.

The second 7″ is backed with an acoustic version of the Violent Femmes “American Music”. This version will be limited to 1000 copies.

Rough Trade records will additionally have a live version of the single available too.

The Hold Steady are currently on a mammoth tour of the US, but will be heading back to the UK to play some headline shows before a couple of festival appearances.

Due to the band’s current can’t-get-enough-of-’em popularity, the band’s label Full-Time Hobby plan to release band’s first two albums – 2004’s “Almost Killed Me” and 2005’s “Seperation Sunday” – for the first time in the UK.

Band front man Craig Finn is also writing a regular opinion piece for Uncut, read his first missive in the May issue of the magazine, in all newsagents now.